Locked down, and going out

Greetings from Rome, which is very excited its nation is leading the Western World for the first time since 476AD. It's a week since the full coronavirus lockdown began here, and finally the neighbours are catching up. If your government has not yet adopted the lockdown craze, fear not; it is impossible to resist for long. At least, you'd better hope so. Even the most stupid and incompetent leaders, meaning of course Boris Johnson and Donald Trump, will get the right idea eventually. The only question is how badly their countries will be hit by then, especially since both nations are already weakened by both woefully unprepared infrastructure, and vast swathes of the population severely immuno-compromised by shame.


By contrast, Rome feels blissfully safe. My kids no longer go to school to sit all day in a thick smog of their colleagues' diseased sputum, I no longer ride to work on the No. 90 Express to Infection, and instead we all sit inside all day suffering no worse contagion than that mild irritant called "enjoying each others' company." The only time I could realistically catch the dreaded infection is when I go to the supermarket.

Trips to the supermarket are now my prime adrenalin rush. The excitement of leaving the house! The fear of contamination! My pride in providing for my family! My shame when I fail to secure the last of the eggs!

There is a line outside the supermarket, because the number of people allowed inside is restricted. They only let someone in, when someone else comes out. The line stretches the length of the store, but everyone stands one metre apart, so in reality it is less than ten minutes long. At the head of the line, in that last minute of nervous anticiptation before entering, the person at the door asks you to put on gloves. The gloves are in fact plastic bags, dispensed on the same kind of roll as the bags you put your fruit in. 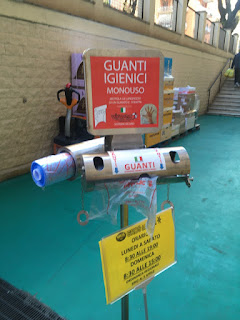 The purpose of the plastic bags is not to protect me from infection -- it is to distract me from infection. I need to be distracted, because the building is so busy inside that it may be a deliberate infection factory so heinous that it would be the envy of the UK government. But with two plastic bags on my hands, transformed into a clown shopper, I have other concerns. The bags may not bother me while I pick up a bottle of milk, or luxuriate in my ability to buy a 12-pack of toilet rolls, but when I reach the fruit and vegetables, the circus begins.

First I am confronted with the roll of actual plastic bags. The free end is hidden, so I have to turn the roll, but my bag hands cannot grip, so all I can do is stand there thumping the roll, perhaps for several minutes. Finally I have the end of the roll, and tear off a bag. Now I have to open it. Even under normal circumstances -- by which I mean, not being in an underground Roman supermarket packed with zombie disease carriers -- even without all that, you know how difficult it is to open those stupid plastic bags. In panicked-paranoid-pandemic-land, with hands that are also plastic bags, it is a true nightmare. Yes, that is what it is. It is a classic nightmare scenario. I am in a supermarket, surrounded by superspreaders, and I cannot leave until I have separated the opening of a plastic bag -- and my hands don't work.

In Italy you weigh your own fruit and vegetables. You put your bag on the electronic scales, and you type in the appropriate code, and it prints out a sticker with the price on it. 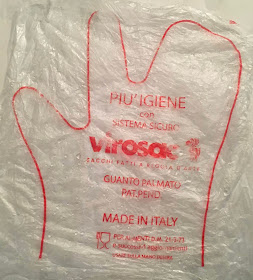 I navigate through the viral predator-prey crowd, and make it to the scales. I put my bag on the metal plate. Then of course I wend back through the human minefield, because I forgot to look up the code for apples. Then I do it all again. Now I put in my code, and print out the sticker.

The sticker sticks to one of my bag hands.

I try to put the sticker on the bag of apples.

Now my bag hand is stuck to the bag of apples.

I try to pull it away with the other hand bag.

All I achieve is the discovery that those price tags stick extremely well. They must have been invented by an adhesive fanatic. Is this really an economically viable amount of glue to put on every sticker?

This is getting desperate, and it only gets worse when the bag of apples starts to rip.

Jesus! If all the apples land on the floor, I'm going to have to start from the beginning. Or run home crying.

The only option is to stand in the middle of the narrow aisle -- did I mention that the aisles are so narrow that two people cannot pass without suspecting each other of sexual assault (presumably by design)? -- and to comically dance slowly back and forth for several minutes until I at last manage to extricate all three bags, preferably with the price stuck to the correct one.

Then I breathe a sigh of relief, put the apples in my basket, and head back to get oranges.

At this point I find it therapeutic to occupy my mind with some calculations.

What are my chances of contracting the virus while in supermarket purgatory?

Let's see. As of this writing, there are about 600 confirmed coronavirus cases in the province of Lazio. We can estimate that the real number of cases is ten times higher. There are roughly six million people in Lazio. So one in every thousand people is infected. At any given time there are probably fifty people in this supermarket, and one person leaves and one person enters every minute. What are my chances of encountering a carrier? Given that there are seven produce items on my shopping list: guaranteed.

I apologise if you could not follow my sophisticated calculations. You need to get used to it. Impossibly broad conclusions drawn from spurious data using opaque methods are the way of the future. It's called "machine learning". I know that it is much easier to follow along with those armchair analysts as they gleefully produce yet another exponential curve fit to the virus data, but their days are numbered. Yes, it is useful to understand that if the number of infections doubles every two or three days, then you go from one to a million cases in between five and eight weeks, but this simple model does not take into account the fact that somewhere between weeks two and six, all hell breaks loose. At that stage wild unjustified speculation can only lead to widespread panic, so it is important to pretend that it is not speculation at all, but "science". Hence woo terms like "artificial intelligence".

Fortunately, we have all been trained to deal with uncertainty. After three years of Trump and Brexit, we are ready for the next level. Will this all be forgotten next year, like the Spanish Flu? Will humanity instead have plunged into brutal anarchy? Or will a new dawn of peace and love have arisen? Anything is possible (except the last one). All we have to do is lock ourselves at home. Furiously reloading the news in hopes of a miracle could keep us occupied for eternity. It is far more exhausting than expected, but much less exhausting than it is for the unlucky few who have to sit in a hospital bed, fighting to breathe.

Next:
Lockdown for Dummies

B.C. (Before Coronavirus) A Letter from Rome
Certified Mail
All Roads