Digging in the Stellar Graveyard

Or: double your black holes!


The LIGO and Virgo collaborations have published their catalog of gravitational-wave detections from the first and second observing runs (2015-17). The news: four more binary-black-hole mergers, and the "LIGO-Virgo Transient" from October 2015, LVT151012, now upgraded to a bona fide detection.

That doubles the number of binary-black-hole mergers observed so far: five had been published already, and now we have ten. Along with the binary-neutron-star observation from August 2017, that fits nicely with my rough prediction a few years ago, that we would likely observe ten black-hole mergers for every binary neutron star. Neutron-star mergers might be the furnace that creates gold in our universe, but the real gold rush of gravitational-wave detectors is a bounty of black holes.


Where did all these new black-hole mergers come from? They were always there; we have known about them for over 15 months. Why were they only published now? Lots of reasons. One was that the GW170817 binary-neutron-star merger came with a lot of juicy follow-up science, and dealing with that came first. It also took some time to clarify that these extra observations really were detections: they were all weak signals, and required careful checks to verify them. Part of that checking was more careful calibration and cleaning of the data from both the first (O1) and second (O2) observing runs, and a re-analysis of all detections with the latest analysis codes. Think of these as remastered tracks of those incredible sounds of the cosmos. As we all know, a re-mastered re-issue always comes with some bonus tracks.

To stick with the recording-industry metaphor (without going quite as far as the LIGO-Virgo social-media Spinal Tap allusions): are the new signals going to get lots of initial critical praise, be touted by afficionados as truly more interesting than the popular hits, but ultimately forgotten by history?

Since the new signals are weak, their properties come with large uncertainties. The most interesting is arguably GW170729, with likely the highest total mass of any binary observed so far: 85 solar masses, give or take 10. But within the prodigious weak-signal error bars it is also possible that GW170823 is actually more massive. The signals' weakness also prevents us from measuring new physical effects. The black holes of the GW170729 binary possibly have the highest ratio between their masses of any signal so far -- that "possibly" qualifier is again an allusion to error bars -- making it a prime candidate for uncovering signs of contributions to the signal beyond the dominant "quadrupole" part. If only it were stronger! With an SNR of 10 or 11 (depending on which set of search results you prefer), it is hard to measure its properties with great accuracy. It could also include the most rapidly spinning black holes that we have ever observed... and it could not. 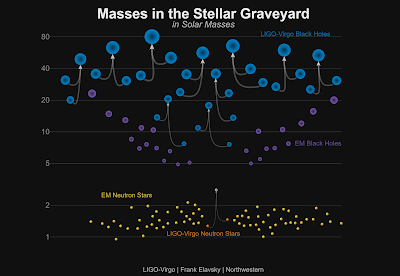 On the other hand, for now this still counts as doubling the number of binary-black-hole signals we have, and improves our estimates of how populations of black-hole binaries behave. The estimate of the rate of mergers in the universe has become twice as accurate as at the end of the first observing run: there are between 20 and 100 of them every year, in every cubed gigaparsec of space. (If that improvement is not dramatic enough for you, before the first detections the rate was estimated to be between 10 and 10,000; we have come a long way in three years!) And although no-one would class eleven signals as significant statistics, this is already enough to give us strong evidence that stellar-mass black holes do not spin rapidly.

All of this will improve dramatically with the next observing run, due to start in 2019. If the detectors' sensitivities are improved as planned, there will be between three and five times as many detections as we have had so far. It could be more, since after all the people who do the detector commissioning are absolute heroes, and it could be much less, if one of them goes berserk with a blow-torch. We will see.

There are other interesting developments to watch as well. In the last year two data-analysis groups decided to leave the LIGO-Virgo collaborations and strike out alone. Fewer friends to work with means fewer teleconferences, less negotiation, less politics, but also, well, fewer friends to work with. However that plays out, for the outside world it also means more checks of the results from independent groups who know what they are doing.

That makes a nice change from independent groups who do not know what they are doing. The "Danish paper" controversy, involving claims of unexplained "correlations" between the LIGO detectors, has sadly sputtered on. What could have been generously interpreted as over-excitement 18 months ago has veered into crackpot behaviour. The problems with this re-analysis have been pointed out by LIGO members and independent groups (both an ex-LIGO group and others), but never properly acknowledged or addressed. The leader of the effort still loudly proclaims to anyone who will listen that he does not believe that there have been any gravitational-wave detections at all. Recently "anyone who will listen" included writers for New Scientist, which appears to aspire to be the Daily Mail of science journalism. This was an 18-month-old non-story that had already been roundly debunked, so their preference for a breaking-scandal cover story over the most basic due diligence was worse than amateurish; it was disturbing. How are we to have the least trust in this magazine, or, by association, any of its neighbours on the newsstand? If I point out a New Scientist story on climate change to an oil-company shill, they will respond, "They are just parroting the party line" -- and it appears they will be absolutely correct. If you will splash a story across your cover purely because some random scientist has phoned you up to spout their latest claims, when they are as patently bogus as the "grave doubts about LIGO" story, then we have no hope of trusting a single word you print on complex highly politicised topics.

The sensitive reader may be shocked that I sullied this account of the lovely new LIGO-Virgo results with that shabby story. But to me both are interesting and important. The science is a testament to the amazing things that human beings can achieve. But the so-called "controversy" is a reminder not only of how hard we have to work to get things right, but also how hard we have to guard against those who make profit from getting things wrong -- and call them out on their shenanigans.