Nothing to see here: they are black holes

The latest news from LIGO: another observation of two black holes colliding. This one dates from January 4th.

The black holes were approximately 20 and 31 times the mass of our sun. For the record, this is similar to the first binary we found back in 2015. The main difference is that the new binary was almost twice as far away (or less favourably inclined to us), so the signal was about half as strong, making our measurements about half as accurate.

That doesn't sound very exciting, does it? The same thing again, but half as informative. Did we learn anything interesting?

I'm sorry, but "discovery of the century" is a hard act to follow. You will have to live with "science as usual": another data point, a small addition to our overall understanding, the tentative conclusions from previous observations sharpened. And that is good. If our picture of the universe was shattered every six months, that would not say much for our ability to understand it. Most of the time our new measurements reinforce the old ones, and that is a sign that we are doing a good job.

The first three observations in 2015 allowed us to make a rough estimate of how often black holes collide in the universe. If that estimate is correct, we would expect to make regular detections -- just like this one. (We found nothing in 2016 because the detectors were switched off for most of the time; it was that kind of year.) 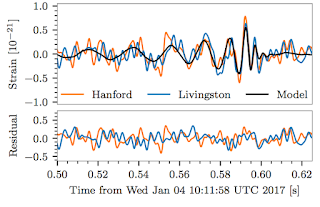 If black-hole binaries are uniformly distributed out in space, then the further out we look, the more we will find. This means that we are most likely to observe them far away. The further away they are, the weaker the signal. That's why the first breakthrough detection was such a surprise -- it was more than twice as strong as the weakest signal we could measure. Most of the time we expect to see binaries at the edge of our range, with much weaker signals -- again, like the one we just announced.

So: these weak signals are exactly what we expect. That means that we should not be disappointed if we find ten or twenty or even thirty more just like it, before we find another one as strong as the first one.

If you have been following the LIGO story, you might say, “Hey! You said that in five years you were going to find hundreds of black holes. If you found only three binaries over 18 months, I find that hard to believe.” How that prediction plays out will depend on the detector sensitivity. The goal is for Advanced LIGO to be roughly three times more sensitive by around 2020. If it is three times more sensitive, it will be able to detect sources three times as far away, and that means it will be sensitive to 27 times as much of the universe. (Here is the relevant technical reference.) That means that a current detection rate of one per year would change to 27 per year, and with each binary we have three black holes (two in, one out), giving us 81 black holes. We have already found nine (or twelve, if you count that marginal detection), and that gets us pretty close to 100. That is just for one year, and that is for a pessimistic estimate of the current rate. So observing hundreds of black holes by 2020 is easy — if the detector sensitivity improves as we hope, and if there are no delays. (You know, like some looney in the White House cutting science funding.)

Of course, we could also have found a signal from a different source: neutron stars instead of black holes, or a supernova going off. If you were hoping for a change from boring old black holes, you might find the latest detection disappointing.

That’s your problem. I am not disappointed. I like black holes. Colliding black holes was what I always wanted to find with LIGO. Two years ago, black holes were the exciting source that we hardly dared to hope for. It just seemed too good to be possible. Hearing the sound of two of the most extreme objects in the universe blurring into each other? Making the most direct observation ever of a black hole? It seemed like a dream.

Two years later, and the murmuring at LIGO conferences is, "Of all the things we could have found next -- this is the most boring!" How times have changed.

What a strange feeling! Imagine you are trying to find aliens. Everyone thinks you're crazy. You're wasting your time. You'll never find aliens! Then you find one. Kaboom! Everyone goes bananas. This is the biggest discovery ever! Then you find another one. Oh my God -- there are more of them! The alien has a sister! Wow! Eighteen months later, you find a third. What is it? It's the first alien's little brother.

Let that be a lesson to you, in case you are out searching for alien life. Take your glory while you can.

Don’t get me wrong. I don’t need more glory. Sure, I am a little miffed that I am not cheered when I arrive for work every morning, but I am told that is merely a personality defect, and I have no legitimate cause for complaint. After all, I get to spend my days measuring black holes. That is no longer a surprise to anyone, but it is still wonderful.