The obvious question: did Brian Keating really write a book just to complain because he did not win the Nobel Prize?

After all, it is called, “Losing the Nobel Prize”. But that could be merely a hook to snare your salacious attention. The book is really a very personal memoir of his life in science, and a history of cosmology, and a behind-the-scenes account of the BICEP2 botched non-discovery of gravitational waves from the early universe, and a critique of the twisted culture and arcane practices associated with the Nobel Prize. Wow: four books in one! Five, if you still think it all adds up to grumbling.

Lots of people grumble about the Nobel Prize. They complain that it does not reflect how the world of science really works. The Nobel succumbs to the myth of individual heroes; it shows a great lopsided bias towards those most visible, most previously lauded, and most Western, white and male; and it operates under a set of arbitrary arcane rules.

I fail to see the problem. That sounds like an accurate reflection of science to me.


Nonetheless, Keating demands reforms: get rid of the three-people limit, and in particular allow the Prize to go to collaborations; death should be no impediment to Nobel glory; and stop being such a bunch of sexist pigs. These might sound quite reasonable — so reasonable that you might wonder why he requires an entire book to explicate them.

The rest of the book is for his four other topics.

Ultimately (meaning some time after I finished it) I decided that I like Losing the Nobel Prize. It is an unusual book, and I like it for unusual reasons. I like that Keating’s motives are suspect. Surely this is a book motivated by anger and frustration and resentment? Keating claims not, or at least not entirely, but I am sure I caught him twitching from time to time. Is this book the fruits of recovery, the means of recovery, or the evidence that recovery is impossible: a full expose of madness? I put it to you: how often does a popular science book provoke such delicious questions? It is a hell of a lot more fun than all those other painfully earnest golly-gosh science books!

I liked that Keating had no qualms — again, it is unclear whether this is from bravery and honesty, or because he is too far-gone to realise — about laying his faults bare. It is rare that a true hot-shot scientist admits what perverse forces drove them on. And not just classic demons like ambition and rivalry, demons you can brag about, but embarrassing and ridiculous demons, too. He freely admits that his science ambitions were driven by the lure of winning the Nobel Prize. Yes, just that one prize, that one medal, that one trip to Stockholm, that one arbitrary man-made accolade that every actual winner is quick to insist was furthest from their minds. This is easy to dismiss as pettiness, and could easily disqualify Keating as someone whose opinions we should listen to. His book does not completely succeed in deflecting those reactions — plenty of reviewers shook their heads over it — but I nonetheless find his confessions admirable.

I liked that his ego was both visible and a bit off-putting. I liked that he talked about his religion, because it was a regular reminder that regardless of their achievements, scientists are still irrational human beings. I liked, ultimately, that the reader is put in a permanent state of vague suspicion. It may not seem like a compliment to praise what was almost certainly not intended, but that is the wrong way to look at it. Keating plunged in and told his story, and by its very nature we are going to be suspicious of his motives, and his chances of emerging rosy and virtuous at the other end were always extremely low, and yet he did it anyway. Good for him! 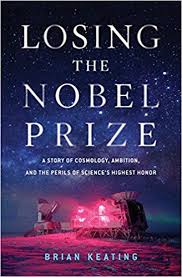 I liked his potted history of astronomy and cosmology. I knew very little astronomy or cosmology when I started, and now I know more. (Some reviewers have complained that the history is selective, or that he muddles some details about inflation, but I am not expert enough to comment.) The history was also made easy to read by the standard narrative technique of withholding the juicy drama until the backstory was out of the way. By “standard” I mean that it is standard in fiction; in a conventional popular science book there is rarely any juicy drama to build up to.

He also beautifully evokes his youthful fascination for science, and his wonder at the universe that still helps fuel his work. These are stock sentiments in popular science expositions, and besides being worn-out cliches, they often come across more as part of the performance than as authentic emotions. I have no doubt that Keating is an expert at ramping up the rhetoric for grant applications and public talks, but the stories of his adventures with his first telescope at age 13 nonetheless transmit a clear message: however jaded, cynical, and shrewdly ambitious a scientist may become, it always started with a true, pure enchantment with nature. The juxtaposition of the wide-eyed child with the battle-worn adult does not inhibit the communication of wonder, but rather throws it into greater relief. The ingredients of great science can be both child-like amazement and amazing childishness, but that makes the achievement no less great, and perhaps even more astounding.

But all of this is just build-up to the big story.

The “big story” is of course the BICEP2 drama.

When the book reached the BICEP2 drama, I was a little disappointed. The science neophyte might be shocked by the politics and personalities of big science, but many actual scientists will have experienced no less shenanigans getting a single paper written than Keating owns up to in his account of the wrangling over BICEP. To summarise the story as he tells it: Keating came up with the idea for the first BICEP experiment. It was not sensitive enough to detect the B-modes that were thought to be incriminating evidence for cosmological inflation. A second experiment (you guessed it, BICEP2) was built, but by this time Keating was also involved with a third experiment, and due to this conflict of interest he was not made a leader of BICEP2. The story as told is not entirely convincing, and very likely this is because there are a lot of sordid details that Keating does not want to put in. Maybe he thinks they will make him look bad, maybe they will make others look bad and he does not want to completely piss off people who are, after all, still his colleagues, or maybe he thinks it will all be too complicated and boring. I’m going to hedge my bets and guess that it is all three. It does not matter: in the end the revelations of the inner sausage-making of science are no more than a teaser. (A teaser for a film? Oooh, now we’re talking.)

The story of the results themselves is well known. They announced that B-modes were found, there was huge excitement, followed by questions about how much the measurement was contaminated by space dust, followed by dialling back the strong detection claim. Keating takes us through the pain from the inside. He says he was worried by dust all along, although that is not the interesting part — that is about as interesting as the 95% of the French population that claimed after World War II to be part of the Resistance. What are interesting are the arguments the BICEP2 team made to each other to convince themselves that the results were solid. Part of their claim rested on an illicitly digitised slide from a public talk from a competing experiment (which they convinced themselves was not the central pillar of their evidence, although it seems that it was), and part rested on an estimated 95% confidence that everything would hold up. As Keating puts it, “Would you enter a lottery, the biggest one in cosmic history, if you had `only’ a 95% chance of winning? Of course you would!” One could quibble that this is not how scientists are supposed to think, but of course that often is how they think — and I guess 95% of the time they get away with it! (Although you may also be reminded of those ridiculously exaggerated safety estimates before the fateful Challenger flight.)

The months between the announcement and the come-down were painful. Keating describes the pain, but from an equivocal position: he was half cheering the results, half pissed off that he had not been the one announcing them. His unusual vantage point prevents him from fully immersing us in the scientists’ suffering, but I think that is worth it for the chance to illustrate how the business of science overflows with complex emotions.

The book ends with an appeal to scientific co-operation, as exemplified by the Simons Observatory of which he is now director. I am not sure how thoroughly inclusive this operation is — I wonder if his old adversaries at BICEP2 are signed up? — or how thoroughly he has exorcised his addiction to Nobel glory — “Aggrieved reformer finally wins Science’s Biggest Prize!” is not as impossible a headline as Keating implies — but in the end lingering doubts are better than sham certainty. I welcome the discomfort.

Also: when I won the Nobel Prize.
Posted by Mark Hannam at 14:57