The Ashtray may be the world’s first coffee table book of philosophy. It a glorious soup of styles. There are lavish photographs with often only tangential connections to the text, and no nearby captions — art reproductions, photographs, movie stills, people, places, things, the Minister of Silly Walks, Humpty Dumpty, an Aardvark. There are notes that run down the margins and accumulate a word count that competes with the main text. The topic of the book, a thought-provoking mix of intellectual assault on Kuhn’s Structure of Scientific Revolutions and personal vendetta against Kuhn himself, flowers into digressions on philosophy, translation, Borges, Wittgenstein, the history of irrational numbers, fantastic animals in the fossil record, and The Man Who Shot Liberty Valance. There are interviews, with philosophers, old friends, Steven Weinberg, Noam Chomsky. There are evocations of a lost age of academic freedom (“You were supposed to be teaching a course on Goedel, but you were using Mao’s Little Red Book”). There are abstract notions rendered in no-nonsense words. It is, in short, a blazing talisman for knowledge, enquiry, originality, uncompromising investigation, and just the sheer all-encompassing mental exuberance that we have to hope will be the cure to our grim times.


That is an explicit goal of the book. In an early marginal note (No. 5, out of 290 throughout), Morris invokes 2017’s nightmare neologism “alternative facts”, and states, “This book, I hope, will serve as an antidote to those poisonous views.” Fat chance. I would love if it were a bestseller. I would cheer to footage of Trump voters lifting their MAGA caps to scratch their heads while they read it, or of newsrooms around the world with a copy on every desk, or someone using it to club Nigel Farage. I fear it is not to be. Even as an attempted knock-out blow to Kuhn, it is too wide-ranging, too digressive, and without a clear reproducible line of argument. 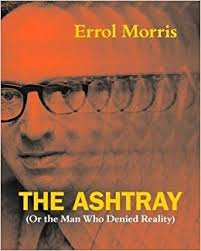 It is, however, the perfect therapy after reading Structure. If, like me, you have recently strayed deep into Kuhn’s labyrinth, The Ashtray offers you an immediate elevator to intellectual fresh air, and a cleansing shower into the bargain. So, science makes progress after all? Yes, of course it does! And what do we call the paradigm of the Ptolemaic astronomers? Oh, now I remember the word for it: wrong! Structure is a valuable book for every scientist to read, so long as you do not take it too seriously. The Ashtray is here to inoculate you from that disease.

It is also fun. Even the stuff about how words attach to reality. This is the part of philosophy I have never been able to get the hang of. If you decide to call your fish Goldie because its colour is gold, and then it turns green, is it still Goldie? Who cares! Surely the names are just shorthand, and if they prove inadequate, then that is just too bad. If Goldie is a name I have reserved for a fish that is gold, then I can no longer give that name to a fish that has turned green. If it is the name I attach to a particular organism, whose continuity through a change in colour could be verified in a multitude of ways, then it is still Goldie. Are we really going to staff entire university departments on this stuff?

That was unfair. That was like complaining that we should get rid of ambulances, just because they make a terrible noise. Ambulances are important, and so are defenders of realism.

The word-stuff is supposed to get interesting when we move on to less tangible entities, like electrons and quarks. Are electrons real? What about wavefunctions? Ok, even I admit this is getting interesting.

Another question. (Morris does not ask this in the book; I wondered about it while entangled in Structure.) Imagine we meet an alien species, and they have an entirely different picture of the subatomic world. They do not have electrons or protons or quarks or gluons, and they do not have wavefunctions, either. It is not that they have similar things with different names: they have a completely different picture. (Yes, a different paradigm!) In the world of the Ashtray, we would worry about whether we can translate between their picture and ours’. Morris would say that Kuhn would say that this is impossible (the two pictures are “incommensurable”) and Morris would say, No, there must be some way to translate. I agree. No, I partially agree, in the following sense, which is my real question: would we be able to translate the two pictures in such a way that they were, as us Earth scientists might put it, equivalent: given a mapping between the two, we may as well say that there is just one picture? Or do we live in a universe where multiple complete and completely independent pictures of reality can exist? By that I mean that we could learn to understand all the concepts that the aliens use, and their ways of doing calculations and making scientific predictions, and we could see that both their way and our way gave the same results, but we might also be able to construct a mathematical proof that the theories were in fact, for want of a better term, “incommensurable”. We could hold both theories in our heads, and use both of them, and they both work perfectly, and try as we might we cannot find any phenomena for which one works better than the other — but they cannot be translated.

This is a question of uniqueness. Is there a unique description of reality, up to mappings and translations? Or not? Unless we meet those aliens, we may never know. And whatever the answer, it is no impediment to how we proceed now. It is just an amusing question.

Here is a less amusing question. Is there even one description? This is closer to the monster Morris is trying to slay. Some people would argue that a complete coherent description of reality is not only impossible, but meaningless, because there is no objective reality out there to describe. There are just a mishmash of different human perceptions, and since we can only know our own perception (or think we know our own perception), I cannot even tell if I have translated between my perception and yours’, because I do not have direct access to yours’.

Morris thinks this is bullshit. So do I. (See here.) Who would not?

Kuhn, for one. According to Morris, history is littered with these philosophical scoundrels. Kuhn was lured to the dark side by Wittgenstein, and long before Wittengenstein there was Kant. On the side of Truth — literally! — Morris invokes Saul Kripke and Hilary Putnam. Oh, you have not heard of them? Maybe that is why respect for reality is in its current sorry state.

Kuhn’s crimes, as I understand them, are twofold. The first is that he failed to declare his side. He pretended to explain scientists, who believe in the real world, without admitting that he did not. If Morris is right, Kuhn gave up on reality long before he started Structure, but said not a word about it in the book (he certainly did not start with, “Just to get it out of the way, I do not believe in objective reality”), until finally equivocating about Truth in the very last section. And that was his second crime: he could never directly state a position. A former Kuhn colleague paraphrases the style (with some admiration), “I have not done the research to find actual evidence for this… but it is true nonetheless, unless of course it turns out not to be”. Morris highlights numerous quotes from Kuhn’s later career that demonstrate that he refused to believe in reality, but I suspect you could find an equal number that argue the opposite — and that vagueness is in itself intellectual misconduct of the worst order.

I realise that not accepting an objective reality, and helping to popularise such an immature philosophical position, is supposed to be the real crime. But if Kuhn had done it in the open, would he have had such an influence? The argument, "You cannot prove that reality is as it seems, so it must not be," is not an argument at all; it is a childish taunt.

Those are what I take to be the crimes Kuhn is accused of. Does Morris secure convictions? Maybe; who am I to say? Besides, the book is too digressive and too much fun for that; too thoughtful and entertaining.

Talk of crimes makes us think of course of Morris’s most famous film, The Thin Blue Line. Now there is a clear crime, and there is a clear question of guilt. That film not only brings Morris’s argument to life, but confronts us with its importance and relevance. The opposing worldview could be elegantly represented by another film, Kurosawa’s Rashomon. The two would make the perfect double feature.

In Rashomon a murder is recounted by multiple witnesses, but their accounts are contradictory, and we are left in confusion. The experience of watching Rashomon, at least for me, was frustration at the perversion of the mystery genre: you have to tell us the answer! That’s how it works! The Thin Blue Line is the reverse. We are presented with a real-life crime, a murder for which a convicted man is on death row, and Morris is determined to find out what really happened. Now the expectation is flipped: in real life we know that evidence is too scant, memories are too unreliable, and liars are too slippery. The pervading sense that we will not — we can not — know the true answer is so strong that it morphs into the epistemological nightmare belief that “there is no true answer”. Morris is there to slap us across the face and wake us up. No. There was a definite sequence of events. And in real life people are rarely smart enough to thread a consistent lie through all of the known facts; their duplicity can be uncovered. And so it comes to pass.

The two films remind us (a point Morris returns to in The Ashtray) that we should not confuse fiction for reality. Rashomon gives us a fictional universe in which a definitive answer is impossible. It is a great work of art, and we are easily wooed into accepting it as a reflection of our world. We feel like we have learned something. The Thin Blue Line provides the corrective: if you want to learn about the real world, then study the real world, not the unreal.

The other lesson is that truth, although it exists, is hard work to extract. Morris’s more recent effort, Wormwood, dramatises the point that just because truth exists, that does not mean you will reach it, and even if you do, the search may not be worth the price.

The Ashtray offers yet another perspective. It argues for the existence of reality and truth, but I was a convert from the outset. Better still, it demonstrates that, in this case at least, the search will lead you past a succession of wonders. The work of finding truth, whether for a journalist, a private investigator, a historian, a philosopher or a scientist, is difficult, tiring, discouraging, and the odds are stacked against you. But it also one of the most enjoyable ways a human mind can occupy its time.


Previously: The Structure of Scientific Revolutions