A blog burst on the horizon: The Danish Paper redux, Losing the Nobel Prize, Philip Roth, Thomas Kuhn, and The Ashtray

After another long absence, during which I was trying to do many other amazing things that I eventually did not do, it is time for a few more blog posts. This is an advance warning, mostly to make me feel sufficiently obligated that I really do write them.


First off there is an older obligation to fulfil: I promised to update the story of the “Danish Paper” one year later. If you have no idea what that is, lucky you; I suggest you skip two paragraphs and do not, under any circumstances, read my original piece. (Brilliantly entertaining and enlightening as it was.)

Now it is one year later. I am not sure anyone cares anymore, but since I was of the opinion that no-one should have cared in the first place, I will share my thoughts anyway.

After that, it’s all books.

Given that I spent the last few years plugging through all of Philip Roth, just in time for the poor bugger to die, you might think I would write about him. But there are too many books, and I have too little that is worth saying.

Instead I will write about, of all things, the Nobel Prize. Now, I do not think the Nobel Prize is an interesting topic. Every September crowds of people flock to the internet to complain about it, but I find it hard to give a damn. Not about the institution of the prize, or about who gets them. Before the 2016 physics prize was announced I wrote a satirical piece in preparation for a possible LIGO win, which meant that for once I did care about the outcome: I wanted to know whether or not to click “publish”. In the end I had to wait an extra year.

Now there is a new book called “Losing the Nobel Prize”, by Brian Keating. Brian Keating was one of the scientists involved in the BICEP2 experiment, and he failed to win the Nobel Prize partly because he was outmanoeuvred from his early leadership role in the experiment, but mostly because the experiment’s amazing results turned out to be wrong. The trauma has caused him to think long and hard about the whole point of the Nobel Prize. When I heard word of Keating’s book, I tweeted my article at him in an act of shameless self-promotion. He responded, because he had not previously seen an old anti-Nobel Rai Weiss quote that I included. He also asked if I would like to review his book. Shameless self-promotion right back at ya! So here I am, trying to think seriously about the Nobel Prize. Thanks, Brian.

It is a strange book to read after all that Philip Roth. I suspect that even Brian Keating’s cosmologist’s expanding-universe-like ego may excuse me for finding his prose a bit of a step down from the maestro’s. Nonetheless, I did find connections. Both writers devote significant space to father issues, and their writing is, ahem, influenced by their Judaism. Keating also employs a bit of authorial motivational ambiguity: is he just upset about not getting a Nobel prize, or is that merely a ruse to lure you into reading an account of the entire history of astronomy and cosmology, or is the appearance of a ruse just another ruse to hide the fact that in the end it really is entirely sour grapes? Sorry, but if narrative ambiguity is your true literary fetish, then The Counterlife is there and waiting to blow your mind. 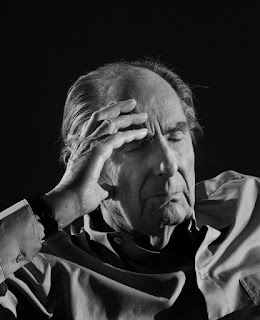 I know it is unfair to judge Keating’s book against Philip Roth. What can I say? This is just bad timing. Keating has suffered at the hands of poor timing before, although it probably never lead to a snarky little shit making cheap jokes at his expense. For my part, I will try to purge myself of my lame jokes and Roth obsession now, so that the actual article on the book is a bit more reasoned.

With that in mind: although there can be no doubt that Roth’s greatest work of genius is Portnoy’s Complaint, The Ghost Writer will always be my favourite. I love the comic timing of the satire in the second section (which I also gushed about in one of my old articles on climate change). And The Ghost Writer is one of those rare Roth novels with a great ending. Other highlights are Zuckerman Unbound, The Counterlife (again), Sabbath’s Theater, The Human Stain, Exit Ghost, The Plot Against America, Everyman, and Nemesis. Everyone raves about American Pastoral, and it is fine, but I could never really get behind it. The factual books, The Facts and Patrimony, are also good. The most accessible book is The Plot Against America, which is popular right now because of its parallels with the Trump presidency; certainly there are some uncanny parallels with Trump’s election campaign. (Roth’s own clarification on these points is great, too, although it mostly highlights to me how even one of the greatest prose writers of the past century met his match when trying to evoke the awfulness of Trump.) What I appreciated even more reading it this year was how cleverly Roth used a counterfactual history as a vehicle to evoke the experience of being a Newark Jewish child during WWII. Truly wonderful, although once again he falters at the ending. There were also some terrible books: the Nixon satire Our Gang is just plain bad, Operation Shylock is abysmally bad, but nothing can compare to page after page of the failed comic tedium of The Great American Novel. (The two other real clunkers are The Breast and Deception, but at least they are short.) There is a lesson in there — even geniuses can produce rubbish, and not realise it (he thought Operation Shylock was going to be hailed as his masterpiece) — but surely there is a way to learn it without actually reading those books. Anyway, there was enough in there to establish his reputation as a true master, and although he had far more reason to feel cheated of a Nobel Prize than Brian Keating, he was wise enough to take the view, or at least strike the pose, of not giving a damn about any silly awards; the notion of a global uber-award for literature was ludicrous even before they gave it to Bob Dylan.

Ok, that’s out of the way. If you want to read a real Roth tribute, try Zadie Smith.

There are two other books I want to tackle.

I have written many times about the filmmaker Errol Morris. I loved his 1992 Hawking documentary, among many other films; I found his life-story fascinating and enlightening; I admire how he gallantly defended the notion of Truth long before it became so clearly an endangered species, which made me rethink my own understanding of Truth in science; and most recently I wrote about his Netflix series Wormwood. At the core of my interest are a series of New York Times articles he wrote in 2011 about the science historian Thomas Kuhn. These have now been expanded into a book, which came out in May, and is called “The Ashtray”. I have been waiting since Morris dropped hints of it over a year ago. Even if the book turned out to be the articles reprinted verbatim with some glossy pictures, I was excited at the opportunity to read them again. I was so excited, in fact, that I decided to first re-read that talisman of Morris’s fury, Kuhn’s influential 1962 book, “The Structure of Scientific Revolutions” -- frankly, Kuhn's prose would also have benefited from a little liver-buggery -- and organise my reactions into an article. Only then would I be fully prepared for the arrival of The Ashtray.

So far, so good. I have read Structure (as we initiates refer to it), and the pondering is underway. The Ashtray has been ordered, and anticipation is so high that disappointment is almost guaranteed. But who knows. I will report back in due course.


The Articles:
The Danish Paper: One Year Later
The Structure of Scientific Revolutions
The Ashtray
Losing the Nobel Prize