Today I won the Nobel Prize in Physics. Yeah, I am pretty excited about it. To be honest, though, I was not surprised.

The prize was awarded for LIGO's first direct detection of gravitational waves, which we all know was the biggest scientific discovery of the century. That is not me showing off. That is what other people have said. It is such an undisputedly incredible achievement that all of us LIGO scientists can afford to be perfectly humble about it. We knew the Nobel was coming. We can take it in our stride. Hell, after all of those telecons of the Nobel Prize Acceptance Working Group, we were starting to get a bit sick of the whole thing.

Just a second. What is that you say? The prize is not for me? Nonsense. Take a look at the citation.


Oh. So it is only going to Rai Weiss, Kip Thorne and Barry Barish? Sure. That's fine. I understand. They have a rule that The Prize cannot be awarded to more than three people. If it was more, I would definitely be on the list. How many more? Let us not get into picky details. Four, five, nine hundred and fifty, what does it matter? Obviously they have to start with the oldest guys and work their way down. It is natural that someone who sneaked in only a few years ago purely out of an opportunistic desire to beef up his CV was going to have an unfair disadvantage. That does not mean that such a person might not have made a really important contribution. And who knows, maybe even the crucial contribution that made all the difference? I could not say, because I do not think that way. We were a team, and we were all essential to the success of the project. We were told that every day. No-one was more important than anyone else. (Except of course the three who got the prize.) 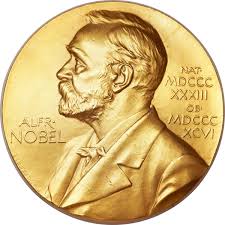 I would not want that stupid prize anyway. What a waste of time! All those congratulations, all those phone calls from the greatest scientists alive today, all telling me that I am even greater. A modest guy like me could not handle that. Then having to write a big speech, and having to go all the way to Sweden, and having to listen to all those other boring speeches before I get to give my own, and then buggering around all evening at some fancy dinner with the King of Sweden. Hey, if I want Swedish meatballs, I can go to IKEA. No hob-knobbing with a bunch of big-headed blow-hards, and I can pick up a new shower curtain while I am there.

Then, after all the hoopla is over, you go insane. I am serious. Give it a few years, and your average Nobel Prize winner believes in alien abductions, reincarnation, or spoon bending. Then they start blathering about racial superiority. What do you expect from such a toxic mix of high intellect and universal adoration? Next thing you know, they are espousing the social healing powers of eugenics. It is only a matter of time before a Nobelist goes right off the deep end, and commits the ultimate cultural sin, and decides to make a lame Hollywood movie.

No, I would prefer to maintain my entirely balanced view of the world.

In fact, I do not care about prizes at all. No true scientist cares about prizes. The transcendent pleasure of discovery is reward enough. It outshines mere human recognition. It is enough for me to know my own brilliance. Scientists believe in evidence, not popular opinion. If I want irrefutable evidence of my genius, I can order a boundless supply direct from my ego.

Besides, the Nobel Prize is just a big public relations exercise. It gets people excited and keeps our funding flowing. That is very important. But it should not slow down the real achievers doing the actual science. That is why they always give it to those old guys. In a way, it is very charitable of those codgers to take such a hit. Rai Weiss predicted that winning The Prize "will fuck me up for a year". He knew what was coming, and he took it anyway. What a hero. It almost makes you think that his share in a million bucks is meagre compensation.

Maybe it would be better just to get rid of these prizes? Rai Weiss also said that the desire to win a Nobel Prize was "the sin in this field". (Check out p.29 of this interview.) He was right. It makes people crazy with ambition. They fight like animals to crush their competitors and score the big discovery for themselves. Is that the kind of world of science we want to leave for our children? Isn’t there some other motivation to be creative and brilliant, besides blind ambition and competition? Can’t we all just love one another?

I have never seen the slightest shred of evidence to think so, but when has that ever stopped a revolution? Let’s overthrow the Nobel Prize! Scrap the damn thing! It has outlived its usefulness. I truly believe that. And so does everyone else who will never receive one.


More wisdom from a principled academic:

How to get your name on a paper

The dream of academia

Some light history of black holes