Time to promote Doctor Who

I have to confess that I enjoyed the latest season of Doctor Who. It gave me a wonderful sense of achievement. The Doctor himself has vindicated my life choices more thoroughly than I could ever have hoped. I once dreamed of being Doctor Who, but now he dreams of being me: a Professor at Cardiff University. 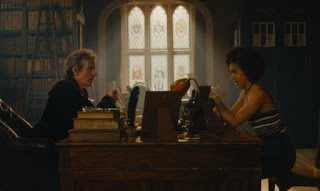 I should qualify that statement. He is not really a Professor, only a mere “Doctor”. I also have a better office. But let’s not bring the guy down. If it took him 1000 years to secure a faculty position, then he is doing better than most.

Also, Cardiff does not appear to have been completely comfortable with his presence; the University’s Main Building was disguised as “St Luke’s University Bristol”. I cannot blame them. Arranging after hours assignations with female students is hardly recommended academic behaviour, and avoiding scrutiny by carefully choosing students who are not officially enrolled is downright creepy. No reputable university would stand for such behaviour — unless of course the guy was well funded. (Was the Doctor’s later reincarnation as a woman a tactic to avoid scandal? Or the next stage in his advances on Bill?) 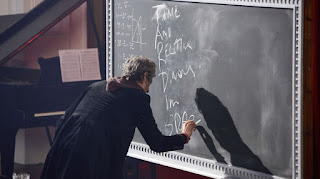 They might also take exception to his lecture technique. Just what is that class he taught? I find it hard to believe that his department’s Head of Teaching approved the syllabus, or that he maintained a copy of the notes on Blackboard. I teach a course on general relativity and back holes, which I think gives me as much excuse as anyone to babble about the nature of time and space, but if I ever spouted the kind of gibberish that filled his lectures, I would immediately be relegated to remedial mathematics. I did once deliver a ridiculous lecture in the same room as the Doctor taught in, but even I did not dare to sneak “TARDIS” onto the blackboard. No wonder it has taken him so long to get tenure [1].

There is another reason why I have enjoyed this season. It has been good. Well, at least better than the previous season or two. Back in Season 8 I told the writers that they needed to try harder. Much harder. They seem to have listened. The show took a long break since the end of 2015, and has come back with stronger stories.

The highlight, as ever, came from a Jamie Mathieson effort, Oxygen. It was brimming with clever ideas — air as a currency, a perfect science-fiction upgrade of a zombie, and the logical conclusion of corporate greed — and excellent suspense set-pieces. Then followed the kind of thing lovers of Classic Who secretly long for, a multi-episode story. And three episodes, not just two!

For all this impressive improvement, the quality does still wobble a bit. The first and last episodes of the three-parter both had weak resolutions. Ok, the only problem with the story’s final conclusion was that it was corny and sentimental, and that seems to be a deliberate feature of New Who. But in the first part the ending was just plain lame. (Warning, spoilers coming right now.)

The story was based on a great idea. Everyone was unwittingly part of an extremely accurate computer simulation of the real world. So far that is a stock science-fiction notion. (Not to mention that the simulation was created by aliens who want to take over Earth.) The clever twist was that some people had found a document that told them that they were part of a simulation, and gave them a way to prove it for themselves. Their reaction was invariably to kill themselves. We enter the story ignorant of all of this and begin, a la Dan Brown, with a mystery from the Vatican: why do all of the priests who translate this mysterious manuscript react by committing the unforgivable sin of suicide? Just what unspeakable horror could they have uncovered?

Part of our — or at least my — appreciation of a story comes from its novelty, and most of anyone’s appreciation comes from its execution. The simulation idea was not novel (dare I invoke the execrable Matrix?), but the suicide idea was. But by the time the mystery was resolved, the suicidal priests were unfortunately long forgotten, and even though we had also met a crowd of CERN scientists about to blow themselves up (after one last champagne toast), the whole shrewd construction was hidden behind a blundering solution to beat the aliens: the Doctor sent an email to his real self.

Really? An email? Is that the best they could do? Was the last five minutes a piece of amateur improv comedy? (Do people still do improv comedy? It would be nice to think that no-one even remembers what it is.) That was almost as wilful an act of narrative sabotage as the end of Monty Python and the Holy Grail.

It would not have been hard to come up with a better explanation. After all, the “everyone will always think of the same number” idea is hardly a standard feature of computer simulations, but obviously a flaw in the one these aliens produced. Why not create another flaw, which the Doctor discovers, and uses to warn the real world of what is going on? Just to retroactively help the writers a little more: how about if the aliens (they are rotting corpse monk things) need a way to enter and leave their own simulations, and that provides a channel for a signal? That only took me ten seconds to think of. Any production team worth their salt could have come up with twenty more.

Ooops, I have digressed to complain, when I meant to be offering congratulations. I'll try again. In the second episode of the three-parter, the Doctor’s blindness sets up arguably the best climax in the entire 54-year history of the series. And whatever my overall opinion of any given episode, every single one was based on a great idea.

The best idea was saved until last. In the final two episodes, the Doctor was allowed to fulfil even more of his ambition to be me: he got to mess around with black holes. In this case he was in a 400-mile-long spaceship slowly reversing away from a black hole, and time at one end of the ship proceeded thousands of times more slowly than at the other.

It was a beautiful conceit, and both far cleverer and far more entertaining than the dull drivel of Interstellar, which used the same time-distortion-near-a-black-hole idea. It is a shame it could not work, but that is a small and excusable science flub, and nothing like that embarrassment of a moon-egg back in Season 8. That served as nothing short of a searing indictment on the scientific illiteracy of an entire culture, that would produce writers ignorant enough to concoct such nonsense, and who not only believe that the public would let them get away with it, but were right. On the other hand, I cannot fail people for being unaware of the subtleties of black-hole physics. The writers could have solved their problems by consulting a black-hole expert, but I understand why they would not. The top local Cardiff choice is an insufferable jerk.

(In case you want his opinion, it turns out to be tricky to pull off a relative redshift factor of thousands or millions — remember that a few minutes at one end of the ship lasted a year at the other end — without the gravitational acceleration changing drastically between the floor and the ceiling of the bridge. Or, put another way, you would like the blood flowing down to your toes to be able to make it back up to your heart, without having to push against gravity billions of billions of times harder than it has to on Earth. Of course, I did not try especially hard. if I received a lucrative BBC salary, I am sure I could think of something… )

All of that is beside the point compared to the wonders of the script. The first five minutes of Missy’s send-up of the Doctor were exceptional. No critic could hope to top Missy’s lines about the Doctor’s “cradle-snatching”. And hear her introducing Bill and Nardole: “These are my disposables — Exposition and Comic Relief.” All the while the Doctor watches on, eating crisps.

No, there is no doubt that this season had great stories. Doctor Who made a huge leap in improvement. Just think what could be possible if it makes just as big a leap in the next season? Perhaps the Doctor will be reincarnated as a Professor.


Previous Doctor Who pieces:
Season 8
Robot of Sherwood
Listen
Time Heist
The Caretaker
Kill the Moon
Mummy on the Orient Express
Flatline
In the Forest of the Night
Dark Water
Death in Heaven

1. The room is not really in the university, but in the National Museum of Wales. It is a beautiful room to speak in. My one gig there was a public talk on Eddington’s measurements of light bending around the sun, on the occasion of a solar eclipse coinciding with the centenary of Einstein’s general theory of relativity. I later turned the talk into this blog post.↩
Posted by Mark Hannam at 11:01