How I saved the world with gravitational waves

Are you filled with hopeless dread, now that the forces of bigotry and fear have been unleashed on humanity at unprecedented levels via individuals of incomprehensible incompetence and stupidity? Is it no consolation whatsoever that moronic despots are already the norm in many parts of the world, and the only novelty is that suddenly the blundering malevolence is so close to home? Do you wish that you could hide from it all?

Perhaps you envy us scientists, who can escape into the endless funhouse of pure intellectual exploration?

Forget it. At least you normal people have the fantasy of science utopia to dream of. If you are an actual living scientist (in modern spelling, that is #actuallivingscientist), you know that stupidity can float through the walls of academe as easily as a ghost — the Ghost of Lost Ideals. I regularly recoil in horror from the headlines and try to retreat into the purity of science, but after only fifteen minutes of a teleconference where the people with the least expertise have compensated by voicing the strongest opinions, I am almost ready to welcome a feral orange furr-ball yelling, “You’re fired!”. (I say fifteen minutes. If you discount the inevitable preparatory “Can you hear me?”/“Do we need to reset the system again?”/“Could the person yodelling in their bathtub please mute?”, then we are down to five minutes, max.)

I can hear your desperate protests. That’s just the science politics! Let’s move beyond the ranting second-rate programmers and the Bayesians who cannot see past their own posteriors, and lose ourselves in the sublime pleasure of the science itself! Isn’t there something — anything — beautiful to distract us?

Hey! Guess what! I might have the perfect thing! February 11th was the one-year anniversary of the first direct detection of gravitational waves, quite possibly the only piece of happy news from 2016. Actually, it was the anniversary of the announcement of the detection; the exciting science really happened in September of 2015. But let’s not quibble.

Gravitational waves should be the perfect antidote for our real world anxieties. The great thing about gravitational waves is that they cannot possibly do the least bit of harm. They are, gloriously, of absolutely no practical use to any dictatorial thug anywhere. Or, indeed, anyone. In fact, the gravitational waves that were measured in 2015 had, by definition, the smallest impact on Earth of anything we have ever measured before — they were, literally, the most inconsequential phenomenon we have ever found! Isn’t that wonderful? I think it is safe to say that it will be a long time before scientists find something even less significant — although don’t worry, we will try!

This heart-warming science will go on for decades. Gravitational-wave research will never have any embarrassing implications for the oil industry, the banking industry, the construction industry, or Russia, so it is unlikely to have its funding obliterated. Unless, of course, someone decides to use the LIGO observatories for a reality show in which Mexicans and Muslims are sent into opposite ends of the 4km-long tunnels and made to hunt each other down on live television. (“In tunnels this straight, there is always a clear shot!”) But no-one would be that sick and crazy, right? Right?

Ok, fine. Does this mean that there really is nowhere to hide?

Don’t be silly. For the answer, do not look to science, but to scientists. When our ideals have been crushed, when we are faced with the inescapable fact that our work is insignificant and our lives meaningless, what do we do? Simple: we withdraw to the impenetrable bunker of our ego.

Last year’s LIGO announcement was the perfect example. On the day of the announcement I was in London, frantically cabbing across town between interviews, like the media superstar that I now realised I was always destined to be.

What of my old cynicism that the public didn’t give a damn about science, and considered it no more than another form of cheap entertainment, like a viral cat video? All gone! What of my suspicion that most people treated science as just another religion, bowing in awe to the Quantum This, Cosmological That and Stringy Other, as dished out by their funky priests Brian Cox and Neil deGrasse Tyson? Forget it! If the public had gone so crazy for gravitational waves, then they must be astute after all.

The news was everywhere. When I was ushered into the BBC studios, every one of the bank of monitors on the wall, showing news from around the country and around the world, was gushing about only one story: gravitational waves.

I was on my way to two TV interviews, to explain the incredible news to the waiting world. The trick would be to acknowledge the 1000 scientists involved while quietly implying that it was really all down to me.

I took the fame in my stride. This was just how it should be. The world was full of hard-working, clever, innovative scientists who produced exceptional results, and never received a single moment of public recognition. And why should they? They lacked my superior ability to stumble into a field where I could perform competent unremarkable work and achieve glory for it. Two TV interviews was the bare minimum I deserved for my genius!

On the way to the interviews the BBC minions took me past posters advertising the recent BBC adaptation of War and Peace. I was tempted to tell them that I had written a blog post about it, but I could not remember whether I was complementary. But who cared any more? Gravitational waves were a bigger story than that old fuddy-duddy Tolstoy. LIGO was making better television — and without resorting to a single sex scene! 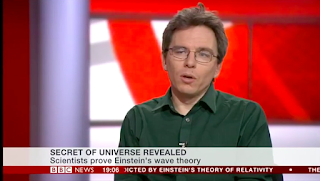 One of the interviews was for BBC World News. They told me that the typical audience was 20 million people. Sure, why not? For a minute I was part of the background in hotel lobbies across the planet. And I was so cool I hadn’t even bothered to iron my shirt. The other interview was less interesting, because they also showed footage of scientists other than me, including a canned interview with Stephen Hawking. Come on, people! This is the 21st century. There’s a new kid in town!

Had all the stardom gone to my head? I certainly hope so. Remaining secure inside my delusional dream-bubble is essential if I want to make it to my deathbed alive.

I cannot pretend it has been easy.

At the end of the interview the presenter thanked me. Before he turned back to the main camera, I was convinced that science had finally been recognised as the highest form of Truth, that deep down humanity cared about nothing else, and that I lived in the best of all possible worlds.  Then he said, “Right. Now let’s turn our attention to Syria. Today the humanitarian crisis deepened further…”

I quickly blocked my ears.

Stay focussed! Don’t let the facts get in! If you do, you might have to face up to reality, become a responsible citizen, and actually try to make a difference.

September, 2015: Originally titled "Hey everyone! I am involved in the search for gravitational waves! Just in case it turns out to be relevant!”

February, 2016:
The Discovery
How it Felt (my media debut)
How We Squeezed Out the Juicy Science


(Minus the last few inconvenient seconds)