What an instructive year 2016 turned out to be!

We learned nothing new, of course — I am hard-pressed to name any year when that happened. But it was a great year for reminders.

What was the most important? You could almost be forgiven for thinking it was this: we were reminded of human mortality.

The news was full of stunned disbelief over people dying. As ever larger numbers of our heroes shuffled into the age range of the Grim Reaper, we — by which I mean the crowd that spans the baby boomers through to the millennials, who currently run the world’s news organisations, along with the hordes of social-media parasites who follow in their wake — we have been reminded that we, too, will eventually die. Given the wide standard deviation around the average life expectancy, we have also been reminded that “eventually” might be quite soon indeed.

"We" probably only means "me". Most of you did not soberly reflect on the year gone by and decide, "I'd better do something useful with the short time I have left!" You certainly were not trembling over the morbid consequences of statistical fluctuations. The collective media consciousness tells me that, in the wake of the slew of celebrity deaths last year, your most likely conclusion was: the year 2016 was itself a homicidal psychopath! You probably spent New Years' Eve in wild celebration that the monster's rampage was finally over.

How will you react when the first big celebrity death notice arrives this year? Could it be that 2016 has broken free of the shackles of History, and is now roaming free throughout all Time? The Rogue Year! Maybe it has always been like that -- every terrible event in the life of the Universe can be put down to yet another cruel visitation from 2016!

This is what it has come to. The general population subscribes to ideas so incoherently moronic that they are destined to show up as the premise of a Doctor Who episode.

So, could that be the most important thing 2016 reminded us of -- human stupidity?

I have to admit that even I, who pride myself on my supreme powers of cynicism, even I failed to appreciate the bottomless depths of human stupidity that were revealed last year.

I should have understood after the inane stupidity of the UK Brexit vote. Instead I fell into the same hole as my supposedly shrewd intellectual friends. I tried to explain it away. The people were frustrated. They wanted to shake things up. I could even argue that it was positive: the forgotten and the mocked and the shat upon would be forgotten no longer!

Nice try, smarty-pants. It was nothing but sheer stupidity.

Fortunately reality finally asserted itself so potently that I could not miss it. 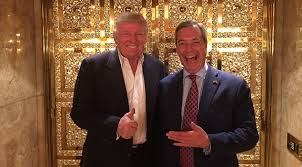 The Presidential campaign of Donald Trump will live in history as an object lesson in human stupidity. We were treated to a solid 18 months of unequivocal evidence that he is a man so petty, selfish, belligerent and ignorant that a six-year-old playground bully would consider him shockingly immature. The examples arrived, one after another, relentlessly. Although the man received far more media coverage than he deserved and was given an incredible pass on so many of his abhorrent actions, there was nonetheless so much despicable shit, strewn over every news site, newspaper, and TV news channel -- including even Fox News -- that no-one could claim to be unaware of it.

In the face of this onslaught of ghastly facts, surely he was doomed. Anyone could have beaten him. The staunchest Republicans would have gladly voted for a gay transgender Muslim with politics to the left of Noam Chomsky. If Trump had instead sneaked himself onto the Democrat ticket, loyal Democrats would have swallowed their pride and voted instead for a zombie resurrection of Richard Nixon, or a perverse genetic amalgam of Dick Cheney and Donald Rumsfeld. The awful truth is that all of these, if not actually preferable to The Donald (it is conceivable that my disdain does have limits), could make a strong case that they were better candidates. I admit it, the result would be close. That is why I was relieved that he was instead opposed by an experienced battle-hardened politician with meticulously thought-through sensible policies.

Ok. I get it. I have learned my lesson. Human beings are really, really stupid.

Many people have not learned. They are blathering about elites and bubbles and the ignored sufferings of the white working class. They are honking on about the spineless complicity of the media, and fake news, and Russian propaganda. They are whimpering about trying to understand the Trumpists and Brexiteers, and wheedling about "reaching out" and "healing".

Are you fucking kidding me?

The only real question is: are these people intrinsically stupid, or can they be educated? If they can be educated, then how? There are scientists who train rats and mice and guinea pigs -- maybe they can help us? Because what we have learned is that, as much as some people may be legitimately dissatisfied with their governments, and as inept and/or immoral as the media may be, and as much dastardly whispering in ears as there may have been from cyberbaddies, in the end our biggest problem is that the average human mind is a mass of feeble grey sludge.

But we should also remember that this is the same pathetic organ that has been powering human activity for centuries, and sometimes it does Ok. Let us recall our statistics again: only a 1% shift in the vote in several US states would have banished Trump back to his gaudy tower. If Remainers in the UK had been less complacent, and actually turned up to vote, today no-one would be able to remember the word Brexit.

There is a respectable amount of evidence that the human brain, pitiful as it is, is capable of storing modest quantities of information. It can on occasion differentiate between fact and fiction. It can draw rudimentary logical conclusions from basic facts. We remember what fire is, we know that it is not a liberal-intellectual hoax, and without a single personal experience to learn from, most of us have worked out that we should not apply it to our hair. It is true that such feats of reason are rare, and can be sustained for only the briefest of moments -- but they are possible.

Can the human mind be trained to pull off this trick more often? Maybe even in a voting booth? Surely it is not too much to ask. If you can reach the end of an internet quiz without clicking on any of the ads, and when driving your car you can correctly interpret traffic lights, then you possess the intellectual prowess to correctly choose Remain over Brexit, and Clinton over Trump. (But not if you concluded, "they're equally bad", or declined to vote -- then you are still a moron. Next time you are parked at an intersection, I suggest you ask for confirmation before driving ahead. Your basic cognitive abilities are faulty. Do not rely on them.)

Despite the catastrophes of 2016, I am hopeful. Some people know little, but they can be taught a little more. It doesn't take much. Few people are as stupendously clever as I am, but they don't have to be. Yes, sometimes the Trumps and the Farages win. Intelligence is not fool proof. But if humanity were as hopelessly supine as 2016 suggests, then the louts would have lead it into the abyss millennia ago.

Let's try not to forget that.