Why bother trying to explain gravitational waves? My answer (with explanation)

Hot on the heels of the announcement on February 11th of the detection of gravitational waves, came a second monumental observation: no-one understands them.

As a member of that august collection of worthy minds, the LIGO Scientific Collaboration, I was very very excited by the first discovery. As someone who has repeatedly ridiculed attempts to explain complex scientific ideas to non-experts, with special reference to Einstein's curved spacetime, you might expect that I also took smug pleasure in the second. Up until a week before the announcement, I would have expected it, too.

But something had changed.

Here's what happened -- and at the end, inevitably, is one more attempt at an explanation.


Exactly one week before the announcement I was at one of those university staff bonding sessions that I always agree to attend, because there is free food. I was at a table with seven other academics, all from different disciplines. At the beginning of the session we had to explain to each other what we did. As always, I said that I study black holes and search for gravitational waves.

That's not quite true. I usually only mention the black holes. That's enough to prompt everyone else to make appreciative oooh and aaah noises, and to tell me that I must be very smart, and that they hated mathematics at high school. There's no need to go as far as the gravitational waves: then I would have to pretend to explain them, and my weary audience would have to pretend to understand. The whole conversation is a drag, and in explicit violation of all the accepted norms of civilised adult discourse, whereby I let you blather tediously about your unremarkable children for five minutes, before informing you what exceptional children are really like, using the convenient illustration of my own.

This time was different. In a week we were going to announce our big discovery, and although I was not allowed to utter a word about it, I was allowed to be excited. (I assume I was allowed to be excited. I admit I only skim-read those emails that began, "If you talk, you die.") So this time I enthusiastically barrelled on into gravitational waves, and how they are ripples in space and time that Einstein predicted 100 years ago, and we have these huge detectors searching for them, and -- this part was very important -- anyone who has even the slightest role in their eventual discovery would clearly be one of the most incredibly impressive academics in your university, who you should tirelessly petition and lobby to be treated very well indeed, and...

I didn't get any further than the second clause before a woman from the medical school asked a question. "What do you mean, ripples in space and time?"

"What do you mean, `stretches space'?"

This was a bit annoying. Now I had to explain basic English vocabulary. "Well, it means that space is stretched. Distances between things get larger."

"But how? What exactly is stretching? How can you stretch space? Saying ‘space stretches’ doesn't mean anything."

She had a point. It doesn't mean anything, does it? "Ripples in space and time" is the sort of science-y sounding mumbo-jumbo that we happily accept from Doctor Who, but it hardly counts as an explanation for a real physical event. Certainly not one that people have spent over a billion dollars and 25 years trying to measure.

That was when I realised that my attitude had changed. Previously I didn't care that people didn't understand. In fact, if they had not undergone over a decade of intense technical training, then they could not understand. That was my old position.

Now it felt different. Now it seemed to matter. It was not just because in one week lots of people were going to ask exactly these questions. The reason was that now, finally, gravitational waves felt real to me. They should have felt real already: measurements of the Hulse-Taylor binary pulsar had already confirmed that gravitational waves were a real physical effect over thirty years ago. They had been an accepted scientific fact for my entire adult life. No competent scientist doubted their existence.

I did not doubt it, either, but there is a huge difference between knowing something, and having an experience that embeds it deep in your mind. I know that there are thieves in the world; I've expressed sadness at crime statistics; I've watched The Bicycle Thief. I was still shocked when my bicycle was stolen.

Without my realising it, I saw gravitational waves in a new way. They were not just an amusing theoretical notion. Curved space-time is not just a mind-bending idea that lets us show off how smart we are. We have overwhelming, compelling evidence that all of this is real. And when we made the first direct gravitational-wave detection on September 14th last year, the weighty stack of evidence just got a lot heavier. This is different to string theory, or the multiverse, or even cosmological inflation -- those are all proposals to explain inconsistencies in our current theories and/or data, but until they are also supported by stacks of strong evidence, proposals is all they are. Einstein's theory is in a whole other league. As far as we know, it describes the universe we live in, and one week before the gravitational-wave announcement it suddenly struck me that that was reason enough why everyone -- everyone! -- should be able to understand what it means.

So, what does it mean?

No, forget what it means. What does the theory say?

If you find it painful, I sympathise. I find it painful, too. I'm just telling you what the theory says, and I'm afraid that based on every test that has been done in the last hundred years, including the incredible precision measurement that was made by LIGO on September 14th last year, the theory appears to be correct. That's just how it is.

Perhaps you feel that this descriptive explanation is insufficient? "Ok, you say the two objects do not move, but the distance between them gets larger. I understand the words you're telling me, but what is actually happening? What does it mean?”

Einstein's theory does not say. It just says that the distance gets larger.

It does not say why.

It does not say what it means.

It does not come with a handy explanation to prevent your head from hurting, any more than it comes with a box of aspirin. It just says what you will measure. 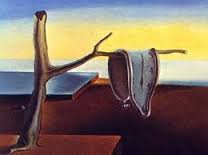 The theory says that space stretches in the presence of a massive object, and also that time slows down. Clocks on satellites orbiting the Earth tick a little faster than the same clocks on Earth, because the Earth's gravity is stronger at the Earth’s surface than far away. Einstein's theory tells us how those clocks differ, and without it the GPS in our smartphones would not work -- it is a real effect [1].

The theory also says that when objects zoom around, the resulting changes in the geometry of space and time travel out as waves at the speed of light. As the waves pass through something, distances and times shrink and grow, back and forth. This is the effect that we describe with the shorthand term, "ripples in space and time". These are gravitational waves. The "ripples" are very small, and that is why we needed the most sensitive instrument ever built to detect them. But we have detected them -- they are real.

Real as all of these effects may be, aren't they a bit weird?

Yes, of course they are weird! Deep down all of Nature is weird.

Think about electricity. That is extremely weird. Yet you use electricity every day, and you are so convinced that it is real that you are willing to pay real money for it. Every month you stick your electricity bill to the fridge with a magnet. Magnets are pretty damn weird as well! Yet they still stick to the fridge, and we think nothing of it, because we see it every day. Maybe we would be just as happy with the effects of general relativity if they were obvious parts of our daily lives. If walking down the street felt much more like trying to cross a wobbly suspension bridge, we might not be nearly so confused by gravitational waves.


I am still suspicious of analogies, and I am still skeptical of how much understanding is communicated by a short article, or a single diagram or cartoon or animation. But I am happy for the people who do know the science to try and explain it in any way they think will work. In the end the biggest barrier to understanding is being willing to make the effort to understand. The excitement of the gravitational-wave detection has inspired a lot of people to make the effort, and I'm delighted to leap at the opportunity to help them out.

How to decode gravitational waves from black holes.


Footnote
1. Professional intellectuals will be horrified at my continual use of such a childish and naive word as "real". It will make them embarrassed and uncomfortable, just like when your grandparents tell a racist joke. They will tut-tut at the vulgarity of the scientist's simplistic world view, and our old-fashioned adherence to such a laughable notion as "objective reality". Ha ha, what yokels we are! Well screw them! Let's see them measure oscillations on the scale of a fraction of the size of a proton, which precisely match predictions painstakingly extracted from 100-year-old equations using thousands of state-of-the-art computer calculations, and then scoff at the word "real". I'm reminded (as so often happens) of Errol Morris's spirited declaration: "I don't know where this nonsense started! But forgive me -- there is such a thing as truth." There is Truth, and there is Reality, and I am proud to begin both of them with a capital letter.↩
Posted by Mark Hannam at 11:04