Occasionally the BBC does a good deed. Their latest was to recommend that I re-read War and Peace. They could have simply made a brief public service announcement, but no, they laid on a lavish six-part costume-drama production, and a cast of top-notch stars turned up to help them out. Yes, that is Paul Dano as Pierre, and, could it be? -- yes it is! -- Adrian Edmonson as old Rostov. How nice of them to go to all that trouble for me.


Watch an episode and you’ll want to re-read it as well.

What? You haven’t even read it the first time? What have you been doing with your life? Just think — if you are hit by a car tomorrow you will lie dying in the road with the horrible realisation that your life was a total waste. Quick! Read it now! Skip classes. Take a two-week vacation. Quit your job. Whatever it takes. Please, people: get your priorities straight[1]!

I’m serious. War and Peace is a revelatory once-in-a-lifetime experience. It is the greatest novel ever written. “Great" is not just a synonym for "very good". If you’ve read it, you’ll know what I mean. As always, Forster put it best: “After one has read War and Peace for a bit, great chords begin to sound, and we cannot say exactly what struck them."

I read War and Peace over twenty years ago, so the high point of my life is long since passed. That’s what made the first episode of the BBC adaptation so sad. It reminded me of a discovery that I can never make again.

By the time we got to the second episode, the Beeb revealed something initially far more depressing. I realised that I had forgotten most of what happened. The whole thing is just a blur of impressions. Andrey periodically on his deathbed, Pierre turned Freemason then political prisoner, and those laughable hundred pages about the equations of motion of history. And of course Natasha. Who could ever forget Natasha? The rest was gone.

For example, in the second episode we reach Prince Andrey lying wounded on the battlefield, having a moment of zen. That's a moment I remember from the book, but it wasn't a moment, it was a truly momentous passage, a long meditation on the ineffable and the infinite, on the futility of our daily lives and our petty concerns and even the wholesale slaughter of a battle, in comparison to some deeper truth that we can never quite perceive. I just went to track it down again in the book. It turns out that it's not a long section at all. It's as brief as in the film. It's one paragraph at the end of Chapter 16 in Part III. “How was it I did not see that lofty sky before? And how happy I am to have found it at last." There's more of the same threaded through a dreamlike section two chapters later, but that's it. Of all 1300-odd pages, why did those few passages loom so large on the crumbling landscape of my memory? I don't know, and I won't hazard a fumbling guess.

Ok, a little guess. Our hero falls in battle. We're only a quarter of the way through the book -- is he really going to die now? No, it can't be! What a state we're in. Our emotions are raw and exposed and Tolstoy has us perfectly primed to experience Andrey's epiphany along with him. Then it's the end of the chapter, and we're off with Rostov trying to find General Kutuzov. What is this? A Dan Brown novel? What's happened to Andrey? Has that bastard Tolstoy seriously left Andrey alone and dying on the battlefield while we're futzing around with Rostov? Yes, we're stuck with this guy for two whole chapters, before -- thank God! -- we're back with Andrey. He's still floating amongst the deepest questions of human existence, half way between life and death, and then Napolean just happens to wander through his life. Is that really Napoleon? Bloody hell, now we’re reading Forrest Gump. But it’s much more than that. Tolstoy makes clear that Andrey’s glimpse of Napolean is nothing compared to his brush with the sublime. How could this fail to make an impact? Just to be absolutely sure, when Part III ends we're still dangling at the cliffhanger of Andrey's fate. "Prince Andrey, with the rest of the hopeless cases, was handed over to the care of the inhabitants of the district." Unlike in the film, we don't hear about him again until after Pierre's duel with Dolokhov, nine chapters and 33 pages later. For every one of those pages that we're left waiting to hear his fate, his experience is buried a little deeper into our own. Tolstoy has taken the simplest narrative tricks, so simple that even Dan Brown and the worst Hollywood slush can pull them off, and used them to strike those great chords.

Of course, I’ve forgotten most of it. That’s just how it goes. We forget everything we read, unless we read it many times. I've already talked about this before — although no doubt you've forgotten. That's a pain when you want to learn something, but for a book like War and Peace it feels like a tragedy.

Dammit! What do I even mean by “a book like War and Peace”? There is no other book like it. I’ve read it, I’ve lived it, and now I’ve forgotten it. What is the point of going on? O woe is me!

Just a minute. If I’ve forgotten it, doesn’t that mean that I can discover it all over again? Maybe it will be even better. The full wonder, but enriched with the occasional joyful blast of recognition?

Oh boy! Now it’s my turn to give real life the finger for three weeks. I’m sorry, Science, but I need to take a break. You can live without me, can’t you? The Truth has been waiting 14 billion years for me to find it, so it can surely wait three weeks more.

Last night I took my old copy down off the shelf. I’ve moved that thing to nine different homes in six different countries. All the pages are falling out. I may need a new copy. Even with some of the pages gone, I got to repeat War and Peace Revelation No. 1: wow, this is a long book! After only two episodes the BBC film is 350 pages in. This is going to be difficult.

I fear my idealism will falter. I would have expected that, if only I had remembered Levin in Tolstoy’s other masterpiece, Anna Karenina. Yikes! Another massive book to re-read.

Well, I’m going to give it my best shot. And if I don’t make it? I still remember the important bits. If I’m hit by a car tomorrow, I'll know, before the lights go out forever, to look up at the lofty sky. 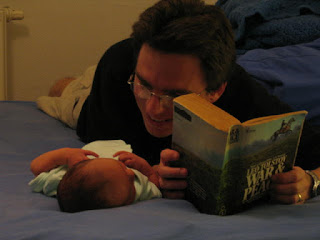 1. Unless you are one of my students about to take the GR exam next Tuesday. Inciting mass non-attendance could have serious consequences for me. I’d like more reading time in my life, but not that much reading time. For those in that lucky category, please ignore this post until next Wednesday.↩
Posted by Mark Hannam at 22:24