It's November 25th, 2015 -- exactly 100 years to the day since Einstein presented the final, complete version of his general theory of relativity to the Prussian Academy of Sciences. For eleven months I've managed to maintain a mask of disdainful cynicism, but now that we reach the hallowed day I cannot resist making some appreciative comment.


It helps that this past semester I've been teaching an undergraduate course on general relativity. After all these years peering deeply into its inconsequential finer points, it's been refreshing to step back and be reminded of what an incredible achievement it is.

In last week's class I reached the calculation of the anomalous precession of the perihelion of Mercury. I decided I should give a bit of a speech about what a great moment this calculation was for Einstein.

First I had to describe what the "anomalous precession of the perihelion of Mercury" was. Mercury orbits the sun, as do all the other planets, along an ellipse. It turns out, though, that this ellipse isn't fixed: with each orbit, the ellipse rotates a little -- about 1.56 degrees every century. This is a small effect. However, it can be accurately measured, and it can also be accurately compared with theoretical calculations. If you use Newton's law of gravity, and take into account all of the effects on the orbit due to the other planets, and of the fact that the Sun isn't a perfect sphere, and presumably many other effects that I didn't learn about in my frenzied research ten minutes before my lecture, then you can entirely account for the changing orbit. Or almost entirely -- there is still 0.012 degrees, per century, that are not accounted for. This is a ridiculously tiny amount, but measurements of Mercury's orbit were precise enough to leave no doubt that this small disagreement between theory and observation was real.

This was a recognised problem for over 60 years before Einstein came along. Many suggestions were made to resolve it -- including the proposition that there must be another planet, Vulcan, orbiting between Mercury and the Sun.

When Einstein had a nearly complete version of his theory, he decided to calculate the motion of Mercury. He found that his theory predicted that elliptical orbits would indeed precess. But by how much? He put in the numbers, and found… exactly the missing 0.012 degrees per century.

When I described this in my lecture, I did what every teacher of relativity always does, and stressed at great length what a big deal this was. Nearly a decade of work! All those wild, abstract concepts -- the non-Riemannian geometry, the tensor calculus, the general covariance and the principle of equivalence, and in the end a set of deceptively elegant but in fact fiendish partial differential equations. And what dropped out of it all? One minuscule, but perfectly precise number that no-one had been able to explain for over sixty years. What a moment.

All of this hopping up and down to make the point to my students was done by rote. I was just repeating a story I'd heard many times before. But somewhere in the middle of it the idea really struck me: the thought of that moment when Einstein first scribbled down the result and realised it was correct. I had a glimpse of a sense of an inkling of what a beautiful and incredible shock that must have been. I never expected to get such an emotional blow in the middle of a lecture on theoretical physics. For a moment I thought I was going to choke up.

Afterwards I went back to my office and looked up "Subtle is the Lord", the Abraham Pais biography of Einstein. I found what I wanted on p. 253. 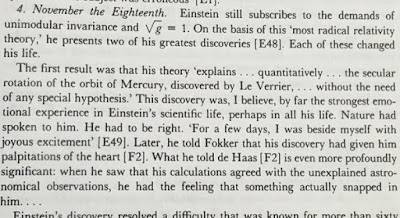 Scientists love to prattle on about the moment of discovery, and the incredible feeling of a scientific revelation. As great a feeling as that may be, there is surely no scientist alive today who has had that experience quite as profoundly and intensely as Einstein must have done 100 years ago.


Advertisement:
To celebrate even more the centenary of GR, I will be getting together with a few of my Cardiff colleagues to talk about "Einstein's Revolution" on the evening of December the 9th. You can book your (free!) tickets here.
Posted by Mark Hannam at 09:24