Mars ain't the kind of place to raise your kids

I don't get out to the movies often. The last time I talked about a film on this blog, it was only because I saw it on a plane. I used to go to movies, but these days I prefer to sit around the house and entertain my family. But a few weekends ago I did see a film -- I was so entertaining at home that my wife suggested I go out.

"You could see The Martian."

"I don't know. Sounds like a lot of effort."

"I could drive you."

"It's a bit pathetic to go to the movies alone."

My son gamely sacrificed himself to the cause. "I'll go with you."

I tried to argue that the film might not be suitable for a nine-year-old. We checked the certification warning. It said, "Infrequent strong language, injury detail." It did not sound so different from any other afternoon with me. 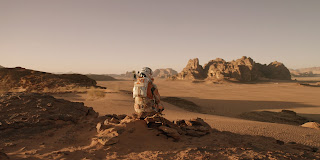 So off we went. It turned out to be some effort after all. We could not be driven all the way to the cinema -- the roads were blocked off. This was because the Vue Cinema in Cardiff is next door to the Millennium Stadium, and currently the Rugby World Cup is on. There must have been a game later in the afternoon, and we were perhaps the only family in all of Wales who were unaware.

We walked the rest of the way. As we got close, we met crowds of rugby fans streaming into the stadium. We walked with them, and tried to give every indication that we were also preparing to worship at the temple of sport that loomed ahead. If they learned otherwise, escape would be difficult. The chances of successfully leaping off the Wood St bridge onto a passing River Taxi seemed small.

I should not exaggerate my obliviousness. I was fully aware of our extreme blasphemy. The eyes of rugby lovers across the world would be trained on Cardiff to watch the outcome of this game. Especially, I guessed, based on the predominance of green and blue in the crowd, those from Ireland and France, but also viewers from anywhere on Earth with a significant Irish or French population, i.e., everywhere. Plus viewers from every other rugby-obsessed nation. In my own ancestral home of New Zealand, there were doubtless die-hard fans who were awake at 5am to watch the game, filled with envy for all those lucky bastards who got to live in the UK and were able to personally attend each of the most interesting matches.

I was just such a person, and I chose instead to enter a sound-proofed building right next door, and watch a nerd film.

Did this give me a rebellious feeling of glee? Did it heighten my appreciation of the film? No. I forgot about it as soon as I started negotiating with my son over the popcorn.

The Martian is about a man, known to his friends and colleagues as Mark Watney, but to you and I as Matt Damon, who is stranded on Mars. He has to work out how to survive until someone comes back to pick him up. This is likely to take several years. In the mean time, his survival prospects are constrained by the insufficient supplies in his little Martian research base, his own ingenuity, and -- this is important -- the stringent constraints of scientific reality. He does not meet any locals, helpful, hostile or otherwise. He does not study the base's science-fiction DVD collection to devise a means to teleport himself back to Earth. He has no superpower. All he can do is work out how to produce enough food and water to keep himself alive. The only supernatural element that tips the odds in his favour is the fact that he is the hero in a mainstream Hollywood film, but of course he does not know that.

I should not say "of course". Modern entertainment is awash with the hackneyed popularised by-products of 20th-century post-modernism. It would not be at all surprising for our hero to state directly to the production team standing behind the camera, "Remember, guys, if I die, your opening weekend will tank." Nor if he ripped off his spacesuit and danced unprotected in the red deserts to "I will survive", with a wink to the audience, as if to say, "That's right, folks: the laws of nature bow to disco."

Fortunately, Mark Watney hates disco, and he lives in a film that loves reality [1]. I found myself thinking, just as I did when I watched Gravity a few years ago: how many films do I see now that give a damn about realism? I am not talking about Serious Art Films here, but popular movies, the big fun blockbusters. If you take a look at the 10 highest grossing films in each of the last five years, the only film that took reality at all seriously was Gravity [2]. (Interstellar sneaks in at No. 10 on the 2014 list. I have not seen Interstellar yet -- although I am sure it is waiting smugly in my future worldline -- but based on reports from friends I took a sneak peak at the final paragraph of the wikipedia plot summary, and the line my eyes rested on was, "Cooper realizes that the tesseract and wormhole were created by fifth dimensional beings from the future to enable him to communicate with Murphy through gravity waves, and that he is her `ghost'." So, umm, I think I will leave that out of the "realist" running.)

What is happening here? Either no filmmaker has enough faith in the intrinsic excitement of the real world to bother making a film there, or the general public cannot be bothered watching them. I vote for the former -- as Umberto Eco would have it, the storyteller has to train their audience. It is their job to demonstrate that reality can be just as surprising and gripping as fantasy [3].

The Martian certainly was gripping, from beginning to end. Even, it seems, for a nine-year-old.

Ninety minutes in, there was some fidgeting next to me.

At two hours, we made a dash for the bathroom together.

After two hours and twenty minutes, it was over. With a "I will survive" dance sequence absent during the movie, we danced briefly in the aisle while it played over the closing credits. Then it was out into the Earth night. I could not tell if the game was still on. From the few people roaming around, I detected infrequent strong language, but no signs of injury. Probably they were still playing. While the streets were safe, we headed home.

1. The only music on Mars is one of Watney's departed colleague's collections of disco. It makes for a reassuringly cohesive soundtrack, and protects the filmmakers from what would otherwise be the irresistible sin of including every space- and Mars-related song every produced. As a result their one weakness is all the more welcome, with an extended play of Bowie's "Starman" at just the right moment.↩

3. I wanted to include a link of Eco's Postscript to The Name of the Rose, but could not find it conveniently online. Fine: you should read the whole book first anyway. It is difficult to tell just which editions contain the postscript (for all I know, they all do), so here is a link to the edition I have. The novel is wonderful, but Eco's relish in "constructing" the ideal "prey" for his "trap" makes it even better. It will make ideal reading material in the week or two until my next blog post. And for anyone who wants to understand what is deeply wrong with the current incarnation of Doctor Who (I just cannot let it go), I direct you specifically to the section, "The novel as cosmological event." And for those who abhor such high-minded discussion of low art, I also suggest Eco on Peanuts, for medicinal purposes.↩
Posted by Mark Hannam at 08:01