My last (real) post was a rant on the crazy notion that anyone can just roll on up and get to the bottom of a technical scientific problem with merely a bit of digging around and careful thinking. Since then I've been wondering how we can finally crush this nutty view. Between the people who think that Truth doesn't exist, and those who think it's readily available to anyone with the wily initiative to open their browser and look, the number of truly sensible people in this world of several billion seems to have shrunk to approximately six. My only consolation is that I am one of them.

To illustrate the problem, let's consider the brightest people alive: physicists. Physicists are indisputably the smartest, deepest, and ultimately most successful thinkers in history; they are the source of our greatest understanding of the universe we live in; the theoretical physicist is the dazzling triumph of human evolution. (Full disclosure: I am a physicist.)

Yet physicists, despite their phenomenal powers, are not all-mighty, and they are certainly not immune to delusion. Quite the reverse. If we are to study the limitations of the human intellect, what better place to look than its supreme exemplars?

Physicists are convinced that they can solve any problem from "first principles".

It can be a terrifying sight.

You don't want a physicist on the flight when the pilot has a heart attack.

"Have you ever flown a plane before?"

You don't want a physicist in the operating room when the surgeon suffers a fatal aneurism.

"Do you think we should find another surgeon?"

And you certainly don't want to let physicists anywhere near your money.

"Help! We've no idea how to sensibly regulate the banking industry."

"Fear not. This problem has far fewer dimensions than string theory. Stand back, physicist coming through!"

I call the physicists' delusion The Feynman Fallacy, after that veritable scientist superhero, 20th century genius Richard Feynman. Not only was he a brilliant Nobel-prize-winning physicist, famous for his straight-talking cut-through-the-crap attitude, but he did truly seem to be able to solve any problem in any field of human endeavour, and he even published a series of entertaining memoirs to that effect. In the process he added "write bestselling book" to his list of "How hard can it be?" credits. The bastard.

Many a young physicist dreams of following in his footsteps. He was a genius. He was a maverick. He did whatever the hell he wanted, and always made a resounding success of it. He took no crap. He was even a hit with the ladies. Ok, his romantic exploits don't exude quite the rakish charm they once did, but presumably only because he's no longer alive to pull off yet another miracle and defend himself.

Such is the power of the Feynman myth that it's hard to shake off the conviction that if he were on board that plane when the pilot had a heart attack, then everything would be fine. He holds the flight manual in one hand, gropes the stewardess with the other, and, while performing a Tuvan throat-singing rendition of "My Way", executes a flawless landing with his bare feet. The air traffic controller announces, "That is without doubt the most beautiful landing I have ever seen."

On a recent visit to a top-notch physics department, I overheard a top-notch professor administer wisdom to a novice PhD student. In that portentous Professor tone, he announced, "My students do not read papers. They do all the calculations for themselves." On the one hand, I applaud his commitment to independent thought and originality. On the other hand, he's a prick [1].

In James Gleick's exceptional biography of Feynman (with the understated title, "Genius"), the physicist Sidney Coleman summarises the danger of Feynman's attitude. "He was like the guy that climbs Mont Blanc barefoot just to show that it can be done." Most people who try to be so defiantly independent disappear without a trace. "Dick could get away with a lot because he was so goddamn smart. He really could climb Mont Blanc barefoot." It's a warning to the cocky Feynman emulator, but also perpetuates the tantalising myth [2].

But does the myth hold up, even for Feynman? Perhaps not. "Genius" also cites one of Feynman's ridiculous failures -- when he declared to his girlfriend that, with no prior musical training, he could teach himself to play "Flight of the Bumblebee".

Feynman was partly a sucker to his own fallacy, but mostly he just knew how to put on a show.

Let's consider one of his most noteworthy achievements, which I remember well from my own period of youthful Feynman fandom.

In January 1986, the space shuttle Challenger exploded soon after take-off. All of the crew died, including a schoolteacher -- the tragic end to what must have been conceived as a terrific public relations coup. President Reagan launched an investigation, and Feynman was selected to take part.

In Feynman's telling of the story ("What do you care what other people think?") he was the one independent thinker on the commission. Everyone else was employed by NASA, or the government, or the military. Feynman was different.

He continually ignored the Commission leader's requests, and went off to talk to whoever he wanted and look into whatever piqued his interest. And it was he who identified the accident's cause. A series of rubber o-rings, which maintained a seal in the rocket boosters, were frozen up by the cold weather on the morning of the launch, and could not function properly. A leak developed, burning fuel escaped, and catastrophe followed.

So far the heroic story is clear. An independent thinker asks tough questions and solves the problem. It doesn't even seem to require any brilliance. So long as we kept our nerve, you or I or any puckish science journalist could have done the same. It didn't even matter that Feynman was a physicist. All he had to do was go in and ask questions and stay sceptical and keep his eyes open. 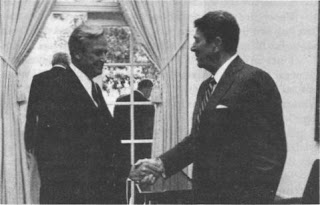 When I went back to Feynman's account, I saw that it wasn't quite like that. What was the first thing Feynman did after he agreed to be on the commission? He went to the Jet Propulsion Laboratory, which was associated with his home institution of Caltech, and got a thorough briefing on the shuttle from rocket experts. Not only did they explain to him in great detail all the workings of the shuttle, they also suggested to him their ideas for possible causes of the accident -- including the o-rings. When he got to Washington and started work, he again went to engineers and got their expert opinion, and learned from them their theories about the accident.

That's not all. He freely admits that the o-ring idea was not his. It was suggested to him by another commissioner, General Kutyna, who had the idea while working on his car engine on a cold morning. This was a detail I had forgotten in my reverent reading of the story [3].

In Feynman's story, it was easy for me to skip that detail. It looks like false modesty. It's very nice of him to acknowledge Kutyna, but we all know that it was really his idea. Other mere mortals wouldn't have latched onto Kutyna's comment; only Feynman could do it.

But that's not what happened at all. In the complex political environment of NASA, Kutyna, an Air Force man with connections to the Titan rocket programme, could not openly question NASA's reports that the o-rings were safe. He had to share his revelation with someone else.

In fact, it turns out that the o-ring insight didn't even come from Kutyna, but from the astronaut Sally Ride, who was also on the commission. As a true shuttle expert, she had connections with even better-informed engineers than Feynman could track down, and she had learned the true source of the accident. As a NASA employee, it was difficult for her to expose her own organisation's mistakes, and she passed the information to Kutyna, who found a subtle way to pass it on to the ideal commissioner: the crazy theoretical physicist with the maverick reputation.

If there is any candidate for a clear hero in this story, it is the NASA engineer Allan McDonald, who revealed that he had voiced doubts about the o-rings the night before the launch. He objected to going ahead with the launch, and had even said, "If something goes wrong with this flight, I don't want to stand in front of a board of inquiry and say I went ahead…"

So it was those with truly expert knowledge who uncovered the problem. Feynman played a key role, but if the real experts had not been involved -- if, for example, the commission was made up entirely of arrogant straight-talking hard-nosed theoretical physicists, who had to extract answers from suspicious and protective engineers and managers -- it's possible that the cause of the accident would not have been discovered at all.

Despite Feynman's portrayal of himself as the thoroughly independent problem solver, it's clear that, like all good scientists, at some level he understood all this. That's why he went to the experts at JPL. That's why he talked to the engineers on the ground at NASA. However much he propagated the Feynman Fallacy, and however much he believed it himself, in practice he went after the truth in the same way everyone should: by combining scepticism, hard work, and careful observation and analysis, with the knowledge of experts.

2. I cannot recommend Gleick's biography highly enough. It contains some of the most beautiful and moving nonfiction prose I have ever read, in particular the account of Feynman's work in the frantic last months of the "physicists' ultimate how-to endeavour" to build an atomic bomb, while his first wife died of tuberculosis. However, I should add that, when it comes to nonfiction, I am not, ahem, an expert. ↩

3. Returning to the story, it's disturbing how badly I misread it. Another recent character on this blog, filmmaker Errol Morris, has reversed the adage "Seeing is Believing" into the far more insightful, "Believing is Seeing". I've read enough pop-psychology articles on the curiosities of human cognition to take that in my stride. But my Feynman mis-reading feels like a far deeper flaw in my powers of perception: "Believing is Reading", too. If a searing intellect like mine could screw up so badly, I dare not imagine what you believe you are learning right now. All I can say is, if you don't feel profoundly enlightened by this blog post: try harder! ↩