A Brief History of Time (The Book)

In the last post I reviewed the movie "The Theory of Everything". Although that film was too thin and unremarkable to make any lasting impression, it did kick up memories of many things that did. One was the 1992 Errol Morris movie based on Hawking's book A Brief History of Time, which I mentioned in the review, and will talk about again soon. The other was Hawking's book itself. Hereafter referred to as "The Book", it was the primary reason I studied physics.

That is something I have never dared to admit, until now. Why not? Before I explain, let me tell you what was so great about The Book.

It was the real thing. It was written by an actual scientist. There was none of that breathless, "Scientists now believe that…" and "It was then that Stephen knew he'd cracked it" and so on. He was telling me what he himself had done. And the work was recent. I was brought right up to date. At the end of the book I felt that I was at the cutting edge of knowledge -- the questions I was left with were the questions Hawking was still pondering while I read.

There was some quantum mechanics. There were black holes. Fine. But then there were black holes that evaporated and exploded. The big bang was a collapsing black hole in reverse. The universe might have no more of a beginning than a round room has corners. When the universe stopped expanding and began to contract again, time might go backwards.

These ideas were reputable science? You could spend your life coming up with this stuff, and no-one minded? They might even congratulate you for it? Wow. Sign me up.

I read The Book in my last year at high school. The following year I enrolled for a physics degree. Now I study black holes. The Book's decisive role is clear. 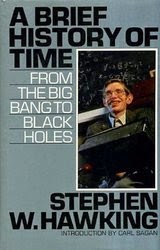 But I quickly learned to keep its influence secret. The joke amongst snooty relativists was that The Book's only achievement was to convince a generation of dunderheads to study physics. I was hardly going to admit that I was one of them. It would have been more acceptable to claim that I studied physics because of Doctor Who.

What was The Book's problem? It was too popular. Too obvious to be a source of inspiration to the true devotee. Better to have stumbled across Schroedinger's "What is Life?" at the age of 11, just as a battered old copy was about to be trashed by the local library. Or to have devoured Dirac's "Lectures on Quantum Mechanics" at the age of 13. Or to have been solemnly handed Lanczos's "Variational Principles of Mechanics" by an earnest and eccentric mathematics teacher. No authentic scholar began their quest for scientific truth while browsing an airport bookstore; intellectual epiphany does not spring from the pages of a New York Times bestseller.

Claiming a reputable intellectual ancestry is all part of the scientist's myth-making. Or so they say. Now I know better. A refined pedigree is a costume for amateurs. The professionals strip down for a mock confession. My confession is that I thought A Brief History of Time was fantastic -- and that I have been too cowardly to admit it.

My only defence is that I did at least once stand up for Hawking's slim volume. Points in my favour: I openly and firmly announced my solidarity to The Book in the face of attacks from a renowned professor of great influence in my field. Points against me: I was very drunk.

The professor in question was hosting a party. Somehow The Book came up. He announced that it was terrible.

"It is badly written," he announced loudly, "and it is boring."

That I couldn't stand for! Certainly not this far into my fourth cocktail.

"You're just jealous," I retorted even more loudly, "because no-one buys your books."

I was later ill outside his house.

You may wonder how my career survived that rude outburst. Simple. My antics were later blotted into insignificance when a senior member of the university administration, even more drunk than I (and with clearly far more training), systematically screamed "Fuck you!" at every other attending senior member of the university administration, before being ill inside the house. Our host devoted the next six months to having this buffoon removed from his post, and my (relatively minor) insult remained unpunished.

In the end, was this distinguished professor really merely jealous of Hawking? Of course he was. That was what I realised while I recovered the next day: The Book was considered a poor appetiser for science not because it was bad, but because Hawking's fellow-scientists were jealous of his achievement, first as a scientist, and then as a superstar. It was a shock, but a valuable shock, to discover that these people, with their wise voices and sharp minds, who had plenty to be proud of in their own right, could deep down be no more than petulant infants.

As for Hawking, he may well be no more mature than they are. I have no idea. I am afraid I do not know any good Hawking gossip -- although, of course, I am willing to hear some if you have any.


Previously: Review: The theory of everything


Next: A Brief History of Time (the film).