A Brief History of Time (The Film)

A Brief History of Time was such a remarkably successful book that a blockbuster Hollywood adaptation was inevitable. The studios duly wheeled in director Errol Morris, hot off the success of his crime thriller The Thin Blue Line, and a star-studded cast of the greats of late 20th century relativity and cosmology: Dennis Sciama, Brandon Carter, John Wheeler, Kip Thorne, Roger Penrose, and of course Hawking himself. The catchy score was composed by Philip Glass at his rousing, foot-tapping best.


That is how I remember it. Ever since, I have assumed that it is as potent and familiar a cinematic artefact in the popular consciousness as Casablanca, Psycho, or Star Wars.

Sadly, I have been mistaken. For all intents and purposes, no-one has seen that film. Not even, it seems, Errol Morris fans. If you look up the wikipedia entry for Morris, it appears in his filmography, but goes otherwise unmentioned.

Revisiting the film, I see that I was mistaken in several ways. I thought that Hawking's book had taught me some science -- science that was so amazing that I was inspired to a career in physics. The film, on the other hand, was focussed on Hawking's biography, but it included the science as well, with beautiful crisp black-and-white animations that were simple, clear, and often gently humorous.

Errol Morris takes a quite different view of the book, and his film of it. "A Brief History of Time is not a book of science exposition," he has said. "If you tried to learn about this material from the book I believe you would be either sadly disappointed or totally delusional." He did not set out to make a film about the science: "There are many places you can get a good account of general relativity and quantum mechanics, but a movie theatre is not one of them."

He explains that he made his film explicitly biographical, because that was what he felt the book really was, a thinly disguised autobiography, "or maybe not even so thinly disguised". It tells stories about the science, which are really stories about Hawking. This achieves the clever double trick of humanising the science (which he proposes as one of the reasons for the book's great success), and of wedding the stories of large chunks of modern physics with the story of Hawking (which I imagine is one of the reasons it made some other physicists so furious). 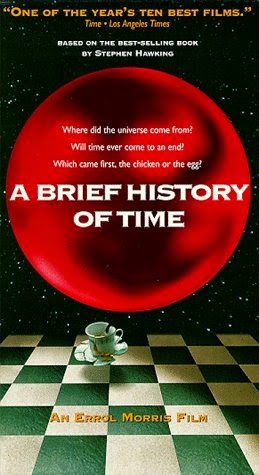 In his film Morris pushed this to the extreme. Biographical details of Hawking's life alternate, sentence by sentence, and shot by shot, with an account of our modern understanding of cosmology. Voice-over descriptions of the science play over a sequence of photographs of the young Hawking. Voice-over summaries of Hawking's youthful exploits play over a sequence of astronomical images. The effect, and based on Morris's comments I would guess this was entirely deliberate, is to completely fuse the science with the biography. Hawking is modern physics, and modern physics is Hawking. They are one and the same.

Do I object to this propagandistic effort to imply that Hawking is responsible for all of modern physics, and everyone else may as well have been a traffic warden? I do have some qualms, but they are entirely dispelled by my joy at how much this pisses off my colleagues. Strong principles are good, but upsetting the strongly principled is even better.

Another surprise in returning to the film was the seeming obsession with religion. Many people have wondered what Hawking was up to when he ended his book with the statement that a final understanding of the complete laws of physics would tell us "the mind of God". A popular conclusion was that this was meant as a joke, or at least ironically. The recent film The Theory of Everything suggests that it had personal motivations.

But in Morris's film it is a continual preoccupation. Again and again we came back to the question: what does modern cosmology tell us about God? Hawking and Morris are both atheists (as far as I can tell from the public record), so what were they up to? In fact, as the film progresses, it veers increasingly towards the slightly nutty. Hawking asks who "breathes fire" into the equations, and Penrose, with no obvious connection to the ostensible topic of the film, tells us his views of consciousness, ending with what seems a remarkably kooky statement, coming from a theoretical physicist: "You could be somebody else, and that somebody else could be someone who lived in the past, or the future" [1].

The explanation for all of this, I've now convinced myself, is easy: this is an Errol Morris film.

I used to think I understood what that meant, but I was, once again, mistaken. I thought that Morris simply made art-film documentaries. In this film we do not hear the interviewer's questions, and the interviewees speak directly to camera. They are not identified. There is no narration, unless you count Hawking. Since Hawking communicates through a speech synthesiser, it is unclear whether he is providing narration or also being interviewed. (As Morris put it, "I had his speech synthesizer in my editing room, so I could have him say anything!" [2])

I have since read more about Morris, and watched more of his films, and the whole experience has been so thrilling that I will be unable to resist boring people with it for some time to come. It turns out that, as unusual a documentary as A Brief History of Time may seem, compared to some of Morris's other films, it is practically a mainstream Hollywood production after all.

One of his key interview techniques is to just let people talk. And talk, and talk, and talk. "I had this three-minute rule that if you just shut up and let someone talk, within three minutes they will show you how crazy they really are." This technique is not immediately obvious in the Hawking film, where the interviews are shown in short segments, but you can see it once you know to look. There is Hawking's sister trying to work out how many ways young Stephen knew of getting into their house. There is the family friend who presumes to judge on the relative levels of normality of members of the Hawking family, while clearly a thoroughly eccentric oddball himself. Later there is Penrose pondering time-travelling souls.

Finally, there is Hawking himself. You would think that a man who slowly composes his every utterance through a computer would be immune to the Morris technique. But no: in the last minutes of the film he turns mystic and philosopher and, ultimately, utters groundless and mostly meaningless statements on questions that run parallel to what is supposed to be his expert topic. It is quite a feat.

If I seem to have come out of this with a greater respect for the film director than the scientist, that is merely a reflection of the more recent enthusiasm. I recommend you take a look for yourself. The film is only a click away on YouTube.

Update: At the end of the last post I invited submissions of Hawking gossip. I have been inundated with juicy stories, and I have enjoyed them all -- keep them coming. My only regret is that I cannot publish them, on the advice of my lawyers.


Previously: A brief history of time (the book)

Next: Career advice I gleaned from Errol Morris, for what it's worth


Notes.
1. Penrose's views on human consciousness are a little more thought-out than the film suggests, but controversial nonetheless. I once attended a non-physics seminar, where a mischievous physicist colleague asked a question about Penrose's contribution to the topic. The entire audience began to seethe, and the speaker could barely control himself as he answered through gritted teeth, "Penrose should stick to subjects he knows about." Then an audience member, who could not control himself, yelled out, "He's a bloody idiot!" In the dire environment of the academic seminar, such rare moments are priceless. I still owe that colleague a drink.↩

2. "We tried out some passages from Mein Kampf, but it seemed in bad taste."↩
Posted by Mark Hannam at 09:30