Review: The Theory of Everything

What kind of film is The Theory of Everything?

The opening move cries out for the category "film bio (formulaic)", with those shots of an ambiguous event in the near-present-day, before we tumble back to the early life of our subject. However, it lacks the key plot element of a childhood trauma involving an abusive parent or dying sibling.

And who is the subject? Stephen Hawking, of course. But not quite. The film claims to be based on the memoir of his wife, so this could be her story -- or their story. Perhaps, but the focus is mostly on Hawking, who is far too attractive as the hero, what with his quest to explain the entire universe, and his degenerative disease.

Could it really be a tear-jerker disease drama? No, because (and I apologise now for the gratuitous spoilers) the hero lives.


On this score, Eddie Redmayne has been praised for his portrayal of Hawking, an unexpected addition to the British cinematic catalogue of singular individuals.

Felicity Jones also does solid stiff-upper-lip work in the role of Jane Hawking. Unfortunately, juicy eccentricity has not yet come to the role of The Missus; stoicism and just the one outburst are all we get.

So, no objections to the lead actors, who have successfully won the entire production a trip to this year's awards season.

What I will object to is the rest of the cast. What a staid bunch the friends and family are, and the fellow scientists even more. Surely the filmmakers have seen some of the real-life counterparts. If not in the flesh, then certainly on film. Take a look at the Errol Morris documentary of A Brief History of Time. (I recommend it well above the current film.) Look at Hawking's mother! Look at Penrose! Look at his ex-students and peers, Carter and Page and all the rest. And listen to their voices. How could any filmmaker not see and hear those people and just bubble with delight at the possibilities? Instead of Hawking's glorious mother, we get his father as common-or-garden Oxbridge duffer, and Penrose as a fat-faced bat. 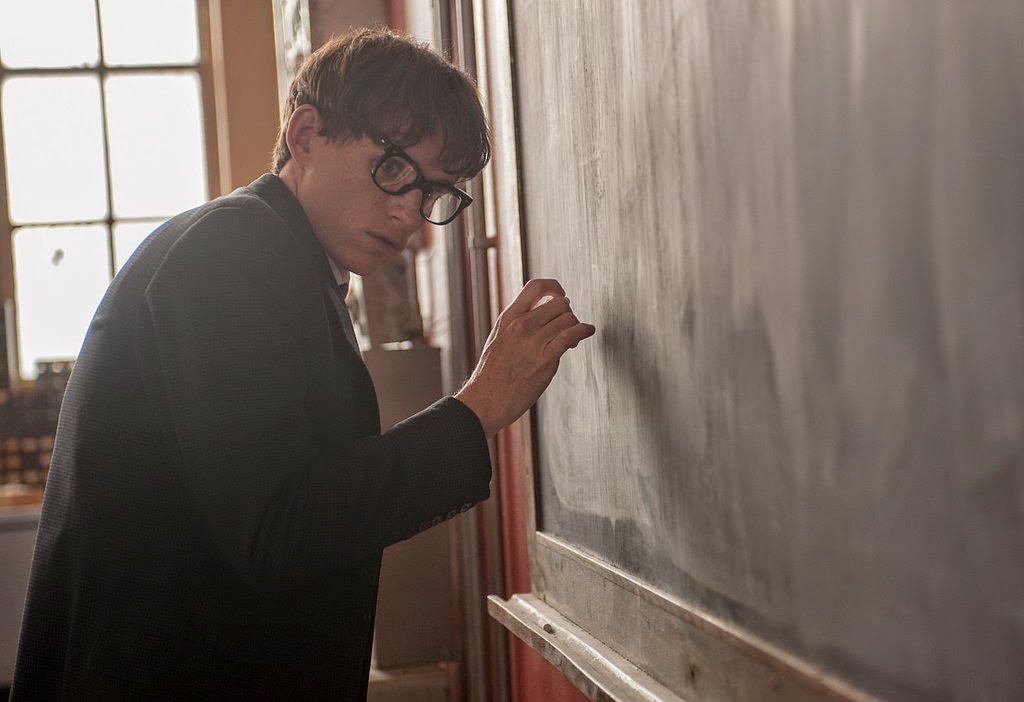 The execution of the story is entirely plot by numbers. Most of the dialogue is lifted directly from A Brief History of Time (either the book or the Morris documentary, which I will enthusiastically plug once again). The film's main achievement is that those words are slotted into pleasantly palatable bite-sized scenes. Standard Hawking stories are transposed with ease: how he promised to leave Oxford for Cambridge if given a First, how he causally completed more homework problems than his fellow students, and so on. It's nicely done, but none of it is exceptional.

Others have complained that we see little of the science. This is simply a subset of a class of wider problems: we see little of anything that we haven't been shown before (and better). As Hawking's disease worsened, communication became harder. Contrary to the Lone Genius myth to which the film heartily subscribes, science relies on communication. Hawking has published a great deal of research with collaborators, students and fellow professors alike. Could we have a glimpse of how that worked? How did they discuss results? How did they argue ideas? How did it work, and how did it not work -- because it is hard to believe that the students always found the situation ideal, or Hawking either, for that matter. (Once again, Morris does it better: we at least get an account of the back-and-forth between Hawking and his student Laflamme about time reversability.)

I understand that this is principally the story of the relationship between Jane and Stephen. All right: how did they communicate? All I gain from the film is that their relationship would have been perfectly hunky-dory, if only they could agree on religion.

The one scene that did stand out was the crisis moment, where he announced his departure from Jane. That provided something new in the collection of Hawking images we've been handed over the years. That scene captured his nervousness before broaching the topic, clumsy attempts to brush off the painful announcement, some insensitivity, and then real tenderness. That was well done.

The rest was merely Ok, possibly with points deducted for suspiciously "nice" characters. Everyone comes out squeaky clean. They're not just good-hearted generous people, they're all saints. Could it really have been like this?

Maybe it was. What do I know? What I do know is that the portrayal of the scientific world was a white-wash. This is my usual hobby-horse, and I'm happy to mount it up and take it for a ride. Where is the rivalry? Where is the jealousy? Where are the fights? The filmmakers only had to eavesdrop on a few physicist conversations to learn that Hawking is hardly universally revered. Fair or not, that is the reality, just as scientific disputes are not merely polite scepticism cured by an exuberant Russian crying, "The little one has done it!" It's not just that they have missed the reality, they have also missed a lot of the drama and excitement of the intellectual world. What sort of storytellers are these people -- what purveyors of thrills and surprises and intrigue -- if they are blind to that or, worse, deliberately leave it out?

So, even at the level of the quiet and minimalist biography, they have done only a mediocre job. And that's before I get on to what a truly adventurous and visionary group of filmmakers could have achieved.

Some examples. It's often said that Hawking, who cannot write down equations, uses images of figures and diagrams in his imagination to do scientific research. That's an attractive and romantic idea, but wielding that tool for lengthy, complex calculations is hard to imagine. Think what a great visual director could have done with that. Think Terry Gilliam, or Tim Burton, or even Peter Jackson in his Heavenly Creatures days. Could we have seen Hawking's mind manipulating wild geometric objects such as we've never seen before on the screen? And perhaps also made of plasticine? Why not! What if an interviewer were to ask Hawking, "How do you work without being able to write?" and he were to answer, "I've never been able to describe it. But somehow the film The Theory of Everything has captured it perfectly." Imagine that!

Or the experience of communication between Hawking and others. How about an excruciating 15-minute conversation between Stephen and Jane? Frustrating, painful, tense, but every moment of it utterly gripping, and in the end a revelatory experience. Couldn't one of those great art-film directors of the 60s or 70s have done it? Antonioni, aided by a Pink Floyd soundtrack?

"Wow, that scene was amazing. But I couldn't understand a thing either of them said."

Or how about an exploration of that most private aspect of their lives? Where was the ground-breaking and controversial sex scene that results in the birth of their third child? Kubrick would have killed for the chance to film that. Yes, Hawking and his family would denounce it, and the director would be accused of insensitivity and exploitation and God knows what else. But come on guys, show some backbone! It would be worth it just for the sight of theoretical physicists picketing theatres.

I know it is unreasonable to ask for these things. The filmmakers made their choices, and we must respect them. After all, this is only a work of Art. It is not the task of Art to show us aspects of our society that we were previously unaware of, or to reveal the darker corners of human nature, or the incredible extremes of human behaviour, or to question our comfortable myths and preconceptions. It was quite enough for these people to realise that there was an aspect of the Hawking story that had not yet been told -- his marriage -- and to decide that this was a perfect topic for a mainstream film. To push further, to challenge us and surprise us -- what kind of crazy perverse goal would that be? Think of the lost ticket revenue! Think of the Academy voters!

But I leave you with this.

If Hawking is such a remarkable scientific figure, who has hatched bold and staggeringly creative ideas, for which he has risked his reputation and shown remarkable intellectual courage, if so, then surely he deserves an equally bold and inspired effort to render his life on film.

If instead he is a merely accomplished scientist who acquired fame far out of proportion to his achievements, then this film may be the perfect mirror of his career. All that is left is for it to win this year's Best Picture Oscar.

Update (Feb 23, 2015): Eddie Redmayne did win the 2015 Best Actor Oscar for his performance as Hawking, but the Best Picture award went to Birdman. Based on the last two paragraphs of this post, and an elementary understanding of basic logic, we can infer... absolutely nothing.

Next: A brief history of time (the book)
Posted by Mark Hannam at 09:58