Here's how it all ends.

Last week's post was written way back at the end of August. You can object that I've been eking out the story of my summer over nine weeks, but I hope you can allow me this little bit of amusement while I myself have also waited to hear how it would end. You've been waiting since last week to hear what happened after I returned to New Zealand in apparent defeat -- but I've been waiting since September!

Of course, I know what happened immediately afterwards. I called my head of department on Skype, expecting to be told that I was fired.

The first thing he said was, "When are you getting back?"

"This call isn't a big deal," he said. "I just wanted to ask you in person, although it's proved harder than I expected. I'd like you sit on our Outreach Committee."

Huh? That was it? No-one wants to be put on a committee, but it's hardly on the same level as being fired.

"You write a blog. Blogs are outreach."

"Great. And I'm sorry about that glitch in the computer system, by the way. Your computational physics course disappeared from the enrolment system for a couple of days. But it's back now."

"You mean that thing with Prick? Don't worry about it."

This all sounded too good to be true. And it was.

He continued. "He's initiated a university investigation of you. But it will take months to run its course, and even if he wins, your contract will still last for the entire academic year. So you won't have any problems fulfilling your obligations to the department, and should you be fired, we'll have plenty of time to hire a replacement. So I'm not concerned."

I pointed out Prick's claim that my UK visa would no longer work.

Now he was finally worried. If I wasn't there, I couldn't teach my course.

After a few moments he thought of a possible solution. "Should I begin the search for your successor immediately?"

I took a look at my Fellowship budget. It was all gone.

There was no way to pay for the trip back. Perhaps I should fire my postdoc and use the leftover salary?

No, that was how other people did it. People like Prick. I would just chalk this one up to experience, and pay for it out of my own pocket.

I got the cheapest standby fares I could find, on the most budget airlines. After three lengthy stopovers spent waiting nervously at check-in desks for a free seat on the next flight, and 36 hours of travel, I finally got to stand in line at the UK Border and find out if my visa was still valid. 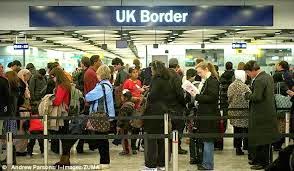 As I waited in the Dirty Foreigners line and watched the adjacent UK & EU line evaporate, I recalled, as an antipodean always should on returning to their ancestral home, the Clive James complaint of "queueing in the 'Other Passports' channel while ex-SS Tank Commanders are given the quick welcome reserved for Europeans." I can take some comfort from the thought that there can't be many of those old buggers still in a fit state to embark on even the most anodyne of package holidays.

When I got to the front of the line, I had a haunting feeling that I recognised the young man behind the desk. I was so exhausted and frazzled, though, that I had no idea what was real any more. As I handed over my passport and awaited the verdict on my visa, I stared at him more closely.

Yes, I did recognise him! He was in my computational physics class last year!

He was an abysmal student. I often worried about him. What could the world offer any man who could not comprehend that in C array indices start at zero? Here was my answer: the UK Border desk at Heathrow. I had every reason to expect that he performed his duties admirably -- so long as no-one expected him to code up a fourth-order Runge-Kutta integrator.

He was clearly uncomfortable, and didn't acknowledge that he knew me. His obstinate refusal to understand the concept of numerical convergence was clearly weighing on his conscience.

But even the standard-issue idiot-proof programs of the UK Government seemed to be causing him trouble. He became visibly agitated as he looked back and forth from my passport to the screen, and frantically stabbed at his computer. Or was there a problem with my visa after all?

Finally he pressed some combination of keys that looked suspiciously like Ctrl-Alt-Del, and stamped my passport and handed it back.

"Don't you want to scan my fingerprints?"

Back at work, I was assured that the investigation Prick had kicked off would be a mere formality. I would just have to fill out a few forms.

They turned out to be a few books worth of forms. I had to write page after page of justification of my job and my qualifications to perform it. I had to take training courses, almost on a daily basis. I had to attend interviews. I had to testify before panels. I had to fill in questionnaires. It went on and on.

I had no idea what my chances were, but it didn't look good. The more closely they scrutinised the work I did, the less convinced they seemed that it was of any worth whatsoever. I spent three months paralysed by miserable uncertainty, until my fate suddenly became clear in a meeting last week with a senior university administrator.

Two hours into a dull interview, he lit up and said, "You write that blog, don't you?"

Uh oh. This must spell the end.

"I love that blog!" he gushed.

Really? There was hope after all!

"I can't tell you how many times I've read the one about how academics are so incompetent that the only way to handle them is to staff universities with 75% administrators."

I never wrote such a post. Honest, I didn't -- you can check! He must have mixed me up with someone else.

There was only one way to deal with this.

"Thank you very much," I said. "I was especially proud of that one."

"As you should be. Well -- we can't possibly let you go. You're far too valuable to this institution."

So it was over. I had passed. I kept my job.

And Prick? No such bureaucratic fumblings for him. After months of public evisceration by vengeful rivals, a ravenous media, and childish bloggers, his university simply decided one day to erase him from their records. The next morning he arrived at his office door to find the lock changed.

The rumour is that he will lay low for a few months, and then appeal for a favour from the most powerful of his ex-students. Most of them learned well from his evil example, but some may have fatal flaws -- sympathy, compassion, or nostalgia for their masochistic youth. And unlike junior academic positions, there are plenty of plush senior posts to go around. Including, as my colleagues gleefully point out to me, Dean of the Faculty of Science at my own university.

Does he have a chance? Never. After what he's done, I can't see any way that he would ever be allowed to set foot in a university again. But of course, that might just be a failure of my imagination.