Doctor Who Review: In the Forest of the Night

To dispense immediately with the spoilers: a massive solar flare is going to destroy all life on Earth, so the entire surface of the planet is covered overnight in trees, in order to produce a huge burst of oxygen that the solar flare will "burn off" instead. Once this has occurred, all of the trees vanish. Meanwhile, the Doctor and his chums get worried, get chased by some wild animals, have a few arguments but, ultimately, everyone gets to go home for tea.

I know this is pedantic of me, but here are some questions:

How did the trees suddenly appear? How did they disappear? How did they (or whatever mysterious force was at work) know that the solar flare was coming? Why did this mysterious force choose to communicate with a random schoolgirl? Why was it suddenly visible and talkative when the Doctor made a slight increase in the gravitational field with his sonic screwdriver? What did that even mean? Was it a deliberate act of cruel perversity to add salt to my wounded reason by having the Doctor pronounce, "I fight monsters, but I cannot fight physics!" Are you kidding me?

Is it only because of my rarefied snobby show-offy scientific training that I happen to know that oxygen is a key ingredient in the chemical process of burning, and that pretty much the stupidest thing you could do if you wanted to protect life on Earth from a solar flare would be to pump huge amounts of additional oxygen into the atmosphere? And what was that nonsense with Tunguska? 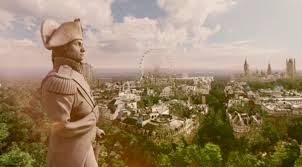 Where were all the people in London? The episode was clearly largely filmed in good old Bute Park in Cardiff, and there is a higher density of people there than turned up in this forest-covered rendition of London.

Why did Clara and Danny, supposedly concerned for the welfare of a class of children during a green apocalypse, spend the entire time engaged in a lover's spat?

How is it that humanity's most deep-seated fear is being lost in a forest, when Listen told us that it was being grabbed around the ankle by a monster under the bed?

If you're going to take an ostensibly science-fiction show, and decide for a change that it's actually a child's fairy tale, then why do you bother with all sorts of meaningless mumbo-jumbo about solar flares and tree rings? Why not just introduce a few talking animals in waistcoats with pocket watches and be done with it? And why is it that most children's stories about fully clothed talking animals make more sense than this episode of Doctor Who?

And why, finally, am I wasting time writing about it? I thought that it would be enjoyable to write about a TV show that I've loved for many years. Yes, I would make some jokes, but they'd be in good fun, and in the end it would be a celebration of a wonderful little gem in our television culture. But this isn't that show. I'm a fan from way back, and I'm doomed to keep watching no matter how wildly it diverges from my tastes -- but I don't need to go through the additional torment of mulling it over and writing about it afterwards.

Maybe the finale will redeem it. But as the Doctor used to say, the end never justifies the means. And even if it did, no end could justify some of the stories I've sat through in the last ten weeks.


Other Doctor Who reviews:
Robot of Sherwood
Listen
Time Heist
The Caretaker
Kill the Moon
Mummy on the Orient Express
Flatline
Dark Water
Death in Heaven