Doctor Who: the legend goes meta

I have been an avid Doctor Who fan since I was a teenager. To such an extent that I have pursued a career devoted to understanding the time-tipping power of black holes, which is the secret of the Doctor's time-traveling TARDIS, or so I was told in an article on the "science behind Doctor Who" that I read when I was 16. My loyalty has taken me to such lengths that I have even maneuvered myself into a job researching black holes in the very city where Doctor Who is now produced. This is a level of devotion that I believe entitles me to share a few thoughts on the current adventures of the mighty Time Lord.

As a fan of the original show, you might expect me to be harsh on the new one. I might bemoan the loss of stories that extend over seven episodes. I might wish that the Doctor was still charming and eccentric, instead of leaping and shouting and borderline psychotic. I might complain that the stories are too frenetic, and the explanations of the complex set-ups, delivered in 29 seconds of rapid-fire dialogue at the end of each episode, remind me of a fake spy flashing too fast his fake ID. I might grumble that after all of those years sniggering over the saucy off-screen antics that must surely be going on between the Doctor and his female "companions", I now have to sit through a continuous drawn-out build-up to a relationship that never happens, complete with tears, trauma, and tediousness.

I have decided I won't do that. The regenerated show has decided on the form it wants to take, and I should judge it on its own terms. Fine. The Doctor has a dark past. His companions are all heartbroken over a love that is forever spurned. The stories are fast and fun, except when they are slow and brooding.

Sometimes it has worked. The first Angels story, "Blink", was fantastic: creepy, cleverly plotted, based on a brilliant original idea, and it came equipped naturally with a wonderful emotional twist. The weeping Angels are by far the most memorable and successful of the 21st-century line of villains.

The emotional pull was far more simplistic in the episode on van Gogh, but wow, did it work. After a century of science-fiction time-travel stories of going back in time to meet heroes from the past, and dropping historical figures into the present, nothing has come close to the powerful last minutes of that episode, where van Gogh, convinced that he is a talentless failure, visits an exhibition of his own work at the Musee d'Orsay.

And now we come to the latest series. Peter Capaldi is the new Doctor. Few actors have been so well-known and well-respected at the time they've taken the role. We can hope for great things.

The first two stories were not inspiring, but excuses can be found. The trio of Madame Vastra, Jenny Flint and Strax are wheeled in to liven things up while we all get used to the new Doctor. A strong new story, with all new characters and all new villains would have made a more impressive start, but, oh well, these things happen. For the second story there was another attempt of what came across as desperate crowd-pleasing: a Dalek story.

Ok. A nervous start, then a show of the Daleks. Now we've arrived at the third story, and we get to see what the new series is really made of.

Well, let's hope not. It was horrible.

Clara wanted to see Robin Hood. The Doctor pointed out that Robin Hood is made up. But decided to go and find him anyway. Huh? Never mind, let's move on. 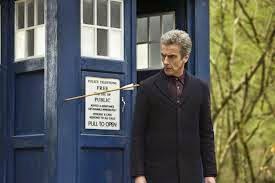 They arrive in Sherwood Forrest, and there to meet them is indeed Robin Hood. The Doctor and Mr Hood engage in a sword fight, except that the Doctor uses a large spoon. And wins. I wish I was joking, but I'm not. Anyway, everyone is friends now, except that the Doctor refuses to believe that Robin Hood is real, and decides at the same time to butt egos with him. This comes to a head in a shouting match while they are all locked in a dungeon, in a scene that I can only imagine that the writer dreams of seeing described in glowing reviews as "the clash of two great performers, in two of the greatest roles in history, trading barbs in some of the cleverest dialogue we have heard this year." And there's probably some soft-headed sap out there who really will write that -- but don't believe them. It was a dreary waste of time.

Somewhere in there Clara elicits a confession from the evil Sheriff of Nottingham, aided by her shrewd insight that this story's plot will be a direct re-hash of many others: aliens have crash-landed and are providing the Sheriff with high-tech muscle while they repair their ship. It would have been almost entertaining if she'd prefaced her guesses with, "If my childhood watching Doctor Who has taught me anything…"

And that wouldn't have been out of place, because the final twist in the plot was that, after belaboring the Doctor's disbelief in Mr Hood's veracity for the entire episode, it turns out that Robin Hood is in fact real. He just turned into a legend with the passing of time. And we're then blessed with a little display of meta-fiction, where Robin explains to the Doctor that he too has turned into a legend, and "I'm as real as you are." Do you get it? They're all made up characters together. If Clara had revealed a childhood love of Doctor Who, that would almost have been classy.

If you turned off before the end, and missed how the aliens were defeated, I suggest you make up your own explanation. It's got to be better than the one I saw. The aliens hadn't pillaged quite enough gold to get their ship into orbit. So the Doctor, Clara, and Robin all helped fire at the ship a golden arrow, which gave it just the extra oomph it needed to get into orbit, but not enough to do anything else besides satisfactorily explode.

I suppose deliberately ridiculous plot resolutions are also part of the ethos of the current show. And I fear I'm going to have a lot more opportunities to try and get used to them.


Other Doctor Who reviews:
Listen
Time Heist
The Caretaker
Kill the Moon
Mummy on the Orient Express
Flatline
In the Forest of the Night
Dark Water
Death in Heaven

Also a movie:
Gravity
Posted by Mark Hannam at 12:18