This week I give you an old school blog post. Meaning: I batter 1500 ill-informed words out of my keyboard, because I'm sure the entire world wants to hear the incoherent thoughts I just had while in the shower. I could wait a week and check some facts. I could pore over a first draft with a first edition of Fowler open beside me. But no: you want to hear my ramblings immediately, and that's why I've run sopping from the bathroom and am typing with the keyboard wrapped in a protective plastic bag.

In fact, just to demonstrate that I am a proper blogger, part of this post will involve me asking you, my misguided readers, to send me information. That's right: you get to blend your biassed, unsubstantiated, anecdotal information with mine, and in the end we'll all emerge the wiser.

Just yesterday, one of my eager team of casual researchers (i.e., a Facebook friend), alerted me to the following article, about the rise of adjunct teachers in US universities. Don't worry, there's no need to read it. I read the entire first paragraph myself, and will gladly interpolate the rest for you.

Adjuncts are people hired on a casual basis to teach classes instead of tenured professors. This is presumably because the actual tenured professors are needed elsewhere to do the highly specialized work of sitting on committees, writing grant proposals, and molesting students. The university could hire more tenured professors, but then would be stuck with them, and no-one wants to be stuck with more professors than absolutely necessary. Adjuncts are only hired course by course, and are cheaper. In fact, they are much cheaper, because they receive no benefits. By benefits I don't mean a company car or a box seat at the football stadium. I mean that they don't get health insurance or a retirement plan. Some of them grow old and die miserable and penniless, just like the lower-class scum that they entered academia precisely to avoid.

This got me thinking. When I was a physics graduate student at a US university in the late 90s, I don't remember seeing any adjuncts. There are several possible reasons for this. One could be that I never noticed them, because I was a heartless careerist asshole who didn't notice anyone who was of no immediate use to me. Possibly, although I'd argue that I noticed lots of people, even the janitor, on that one occasion that I passed out in my office and he woke me up when he flung the door open with his mop at 3am. But then I skipped ahead in that article, and noticed that sometimes adjuncts are paid less than the janitors, so maybe they really were refused entry to my consciousness, which is equipped with an elitist's equivalent of a bug screen.

Another explanation is that maybe there are very few adjuncts in physics, and the sciences in general, where casual teaching work is done by graduate students, and sometimes by research postdocs. This explanation doesn't quite work, because there are also graduate students in the humanities, and presumably graduate students can be paid even less than the adjuncts. Plus, there are plenty of colleges where the science departments do not have graduate programs -- do they run on adjuncts? Perhaps the explanation is that the science departments bring in more grant funding, and so the universities provide them with larger budgets, and so they can afford to take the moral high ground and evade the adjunct route. But what kind of efficiently functioning organization ever takes the moral high ground?

It's clear that getting to the bottom of this could take me a very long time, perhaps even several whole minutes on google, and that is where reader input comes in. Can anyone tell me what is actually going on here?

My own dim understanding of casual teaching, before I started to read the aforementioned article, was that it was used as a crutch by people on their way to bigger things. I'm thinking of those generations of great American authors who kept themselves in easy money teaching creative writing while waiting to make it big. In my head is this fantastic letter, which one of them, Kurt Vonnegut, sent to another, with advice following the recipient's recent appointment [1]: 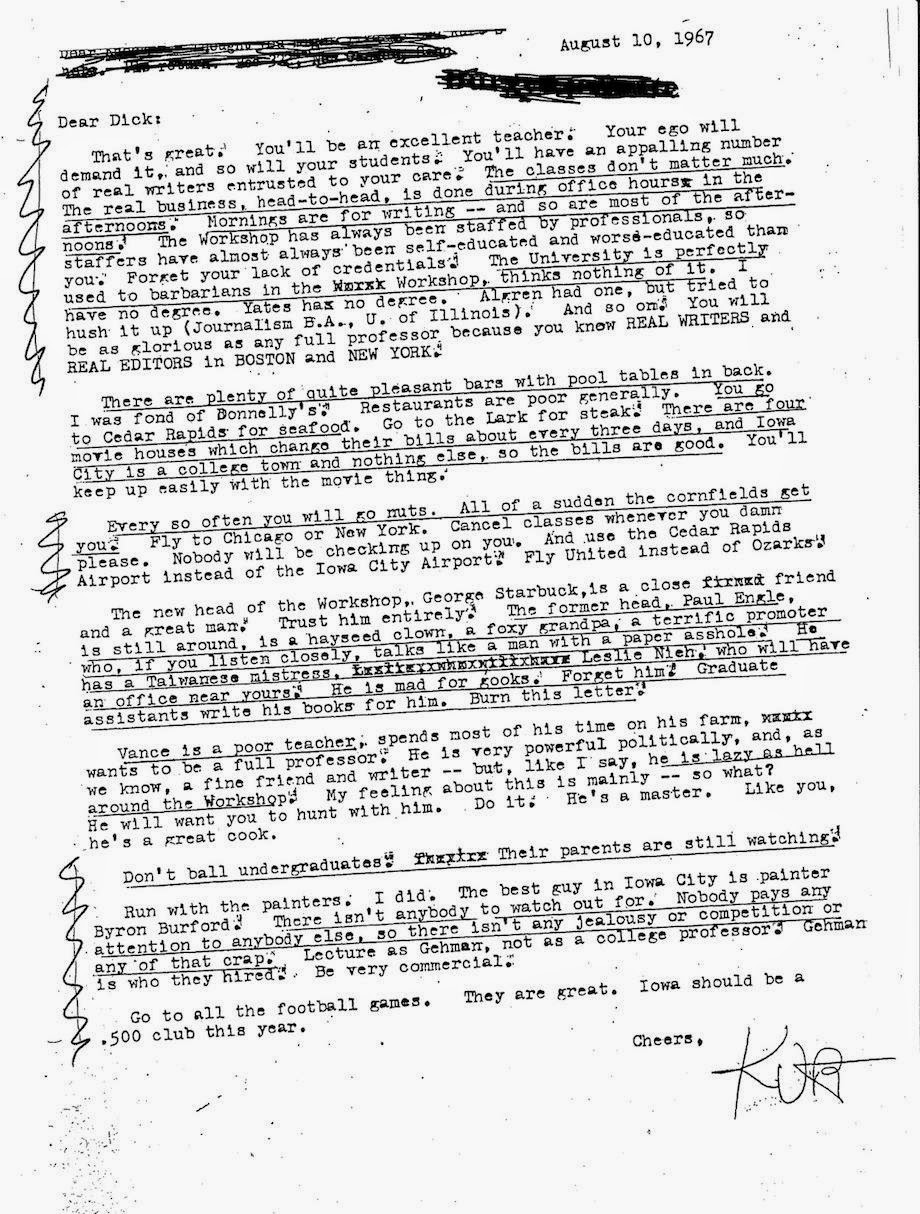 Those were the days [2]. I have moved a total of five times since I received my PhD, and not once did I receive any advice to match that. I'll admit that I did receive excellent advice on finding an apartment and opening a bank account, but I was never appraised of any future colleagues who might have a "paper asshole". Assuming that he refers to some unpleasant personal characteristic and not, although it cannot be completely ruled out, a variety of quirky pornographic origami -- then I have many times shared buildings with people who possessed all plausible options for this colorful label, and I could certainly have done with some warning.

I might add that I first saw this letter in an article in Slate, which noted that Vonnegut seems incapable of writing a boring paragraph. So we can see that he would never have been much of a blogger.

Now it seems that it isn't just writers waiting for a break who work as adjuncts. It is almost everybody. According to a statistic stated (but sadly not cited) in the adjunct article, 78% of college professors were tenured in 1969, but by 2009 only 33.5%. Once again, I'd like some input here. Is this the case in the sciences as well as the humanities? In large research-lead universities as well as smaller liberal-arts colleges? And what about my old physics department of UNC-Chapel Hill? Is it now full of adjuncts, too -- and not just to fill in for any professors currently holed up in South American prisons? These are the questions I hope readers can answer for me.

In the mean time, I'm reminded of another forlorn beast in the academic zoo, who often complains of neglect: the postdoc. Postdocs are shuttled around the world's research universities on contracts as short as one year ("extendable to two, subject to sufficient progress, and funding"), and are expected to get up to speed with the local research efforts within weeks of arrival, to continue to complete collaborative projects for years after departure, and, while employed, to perform research, supervise students, write grants, and teach classes, all for the benefit of their supervisor who, if suitably pleased, will deign to add their name to the list that is regularly fed into their automated recommendation-letter generator. All of this is endured for the dream of a faculty job, which is about as likely as those old-time writers' dreams of a bestseller -- but at least those guys got to "cancel classes whenever you damn please".

I was a postdoc for many years, and over that time naturally acquired great sympathy for their cause. Of course, since becoming a faculty member I've been offloading it all dirt-cheap on ebay. It's hard to shift, but articles like the adjunct rant help. Sure, postdocs are sometimes treated like dirt, but at least they're given health insurance and a retirement plan. I also assume they're paid a lot more than the janitors, or store managers at McDonalds, or any of the other standard examples that are regularly trotted out in these discussions [3].

Having pointed this out, there is now a danger that all those universities that are working to cancel any benefits they accidentally do award to adjuncts, will now start doing the same for postdocs. But that is one of the advantages of writing these things in a blog. No-one of any consequence reads them.

1. I hope it remains mandatory for clever people to go through a phase of Vonnegut devotion, somewhere between the age of 16 and 24. Slaughterhouse Five is wonderful. So is Cat's Cradle. Once hooked, the others seem wonderful, too, albeit indistinguishable. Then he's forgotten, until beautiful artifacts turn up, like this letter.↩

2. I've decided that my favorite sentence is, "Burn this letter". Yeah, right. How many times did Dick return home for a grueling day grading clunky stories and pour himself a bourbon and seek solace in this letter? How many dinner parties ended with him staggering off to his bedroom and returning to recite from it? Or have I got it wrong? Maybe all of his friends wrote like that.↩

3. One of the amusing sub-texts of the adjunct article is the way it skirts around the delicate question of why exactly someone who gently encourages students to read a few books, should be paid more money than someone who provides for our real human needs by ensuring that we work in a hygienic environment or have food to eat. On this point, we come across perhaps the best sentence in the entire article: "As a culture, we value the dissemination of knowledge more than the distribution of hamburgers." That sentence is highlighted in a large-font panel, to make sure that lazy skim-readers like myself don't miss it. But there does seem to be an implicit hand-wringing liberal academic's doubt lurking even in that clever syntax: "But should we?"↩